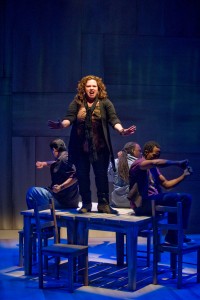 Ostensibly about the aftermath of Hurricane Katrina, the dynamic members of New York-based Universes (writers and performers of “Ameriville”) quickly take this high-powered percussion- and vocals-driven show down a twisting American path that leads out of New Orleans and into rapid-fire discussions of topics ranging from homelessness to healthcare to illegal immigrants. By the time they start decrying fracking and predicting a Latina president, it’s a bit too clear that this piece has a target audience. These hot-button topics could each spawn their own full-length show, but here they’re mostly treated superficially, usually with a quick statistic and a creative piece of dance, stand-up or song. There’s a liberal sense of heavy-handedness and safety here, as if to say: “Things are terrible, but at least no one in this audience is part of the problem.” The energy of the cast stomping around on Brian Sidney Bembridge’s less-is-more set is infectious and director Chay Yew highlights the troupe’s collaborative strengths, but the content would benefit from more cohesion and less partisanship. (Zach Freeman)