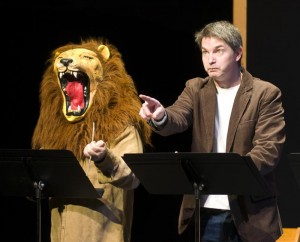 George Bernard Shaw’s 1912 adaptation of one of Aesop’s fables was a bit of a dramatic firebrand when it first premiered, attacking religious and political hypocrisy and calling instead for earnestness and honesty. Nonetheless, the story of Christians being sent to the slaughter in ancient Rome was so wildly misunderstood that the writer felt it necessary to explain himself in a note distributed to his New York audience in 1915. Sometimes the best satire will backfire and be taken at face value by those at whom the satire is directed.

I have no doubt that in today’s climate the play has the potential to cause trouble among more religious and conservative audiences, but ShawChicago undercuts this potential by presenting “Androcles” in its signature concert reading style. The show tries to augment the actors’ straightforward performances with suggestive costuming, props and sound, but it’s all rather quaint. In order to be truly effective, this play really needs to have the bite and fire of a full production. (Neal Ryan Shaw)