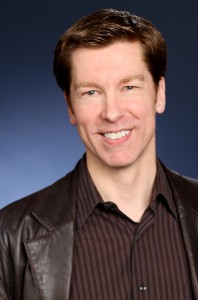 When Timothy Douglas resigned midway through his first season as Remy Bumppo Theatre’s artistic director, Nick Sandys stepped up to fill the role. Sandys had already been an Artistic Associate, helping to choose the seasons, running extra programming and essentially working as a literary manager, so the transition made sense.

“I have a working relationship with everyone involved, so I already start from a really good position,” Sandys says.

Usually Sandys holds down multiple jobs, like voiceover, teaching, acting and doing fight choreography, to make sure that if one falls through, he can make a living. Now he has a full-time year-round job as the artistic director, hiring directors, teams of designers, leading board meetings and guiding the future of the company.

“I suddenly feel adult. I’ve felt somewhat like a student always. I don’t have to keep hunting for the next job. I can focus,” Sandys says.

Even though he will be cutting back on outside jobs, he will continue to be an Artistic Associate at First Folio, where he will be performing in two shows during the spring and summer, and he will fit in the occasional fight-choreography project at the Lyric Opera or the Goodman.

As for guiding the theater artistically, Sandys feels like he is Remy Bumppo—yes, he knows that this sounds a bit crazy. But he explained that Remy Bumppo is known for European modern classics, and Sandys is very much a product of a classical education—he studied Latin, Greek and a lot of Shakespeare at Cambridge University.

Sandys says he sees Remy Bumppo as doing these classics with American spirit and emotion. The theater takes witty, language-based plays, puts them in an intimate space and uses emotion as a starting point to attack the scripts.

When Douglas told the theater in December that he was going to leave, Sandys was already part of the planning process on their last play of the season, “Chesapeake,” and so the transition, Sandys says, went smoothly.

Sandys says Douglas has left a powerful legacy he hopes to build upon. He describes Douglas’ role in questioning and helping to define Remy Bumppo’s vision, and how the company wanted to contribute to the theater community. Sandys also admires Douglas’ efforts to improve diversity in the company, and hopes to continue to promote diversity in theater.

But there’s also the excitement of deciding what direction to go in next as a company that already has strong footing. “It feels like we are starting from scratch again. So now we know why we’re here and that’s a really exciting place to be,” Sandys says.

As for shows that might pop up in the next season, audiences won’t know about next season until possibly the end of March, a month later than they usually make the announcement. But Sandys hints that two he would love to direct one day include the Tom Stoppard play “Travesties” and Shakespeare’s “Othello.”

“That’s my purpose in life, to find those plays,” Sandys says. (Caylie Sadin)