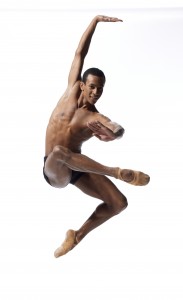 White, line-drawn figures walk across an LED screen running the length of the stage while below a few dancers create abrupt, angular lines to sounds reminiscent of subway stations and the beeps of a telegraph machine. Thus begins Wayne McGregor’s “Infra,” a piece he created for the Royal Ballet of London after the underground bombings in 2005. The Joffrey brings the piece to the U.S. for the first time, executing choreography that demands hyper-flexibility interspersed with quicksilver phrasing.

The cool precision of McGregor’s choreography can sometimes come off as devoid of emotion, but the currents of anxiety and fragility underpinning the subterranean “Infra” are very human. A series of duets that follow the opening sequence, set to strings and piano by Max Richter, are the embodiment of urban modernity: coolly flawless, detached, yet yearning just beneath the polished surface. When the couples line up across the stage, each pair executing their precise sequences in separate, constricted rectangles of light, digital figures passing overhead, never has perfection looked so quietly desperate.

Modernity is the theme of the program, opening with the cold fire of William Forsythe’s “In the Middle, Somewhat Elevated,” a piece that, no small thanks to the pop-industrial score by Thom Willems, feels 1987 in the best possible way: big lines, cool poses, the fun parts of “American Psycho.” Between the two is a reprise of Christopher Wheeldon’s profoundly tender “After the Rain”: a gorgeously poetic contrast, worth the ticket price alone. (Sharon Hoyer)