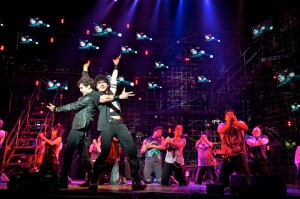 Originally a 2004 concept album by Green Day, “American Idiot” is not your typical Broadway show. Staged like a rock oratorio rather than a book show, the show’s set is a cross between “Rent” and U2’s “Zoo TV” tour with its many television monitors that are often reflecting the world and the feelings that its characters are expressing.

Many traditional Broadway-style show lovers have complained about feeling a disconnect to this show because it is so different from those that they are used to, but that is part of the charm of “American Idiot.” I was concerned going in that some of the delightful ambiguities of the album would be made linear and direct for the show, but thankfully, such is not the case. This is a show where the template is actually the rebellious hootenanny optimism of 1960s-style folk-rock but arranged here for maximum soloist to chorus effect.

And because the songs are full of melodic hooks and catchy choruses that are imbued with contagious optimism as well as the naïve spirit of rebellion and the exaggerated sense of self-importance that is both the curse and blessing of youth, it is easy to get caught up in what these characters are singing about and celebrate what is being felt or what we once felt. Broadway has attempted to mine this spirit before in shows such as “Hair” and “Rent,” but here it is done with a property that began life as a concept album, not a book show, more in the tradition of the Who’s “Tommy” (the album, not the movie or the show) but here, refusing to let itself be wrestled into a Broadway-style set piece. Bravo. 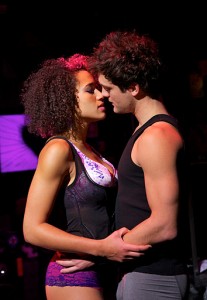 The problem with being this up-to-date is that the references and movements can already be yesterday’s pop culture, such as the head-banging nurses in the hospital, political figures of yesteryear (notably W. and Dick Cheney) and in fact, the prominence of print media and television monitors in general are all rather pre-millennial.

The other issue is that clearly the cast is made up of show folks, not rock folks, and so the singing style is more Broadway pop and the look of them is rather apple pie more than the rebellion that they are singing about. And various cast members are required to pick up guitars at points in the show with varying degrees of success. The finale, in fact, has everyone in the cast strumming a guitar, some very tentatively and others off rhythm and not in tune. It’s not that every young kid knows how to play the guitar well, but at least play it like you think you do, with swagger and confidence. (Dennis Polkow)