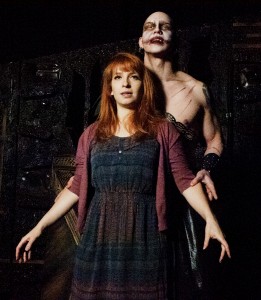 Playing out like a cross between “Hellraiser” and “In My Skin,” Scott T. Barsotti’s seventy-minute psycho-horror follows the tortured Cam (Sasha Gioppo, haunted and haunting) after she awakens from a coma with the belief that she has lost the ability to die. Her controlling sister (Casey Cunningham) and worried lover (Michaela Petro) attempt to convince her otherwise, which, rather enigmatically, sends her into a bit of a suicide-attempting frenzy. Throughout, Cam is followed (and assaulted) by four creepy-crawly beings, led by the gravelly voiced Jude Roche, who is so imposingly menacing that he almost feels out of place with the rest of his devilish compatriots. But while all of these demons are extremely well developed, both in their movements (Barsotti) and costume/makeup (Aly Renee Amidei), their spookiness is underutilized. Perhaps overutilized is more precise. Overexposed for sure. As a genre, horror largely relies on shadows, darkness and uncertainty, but Julian Pike’s lighting design (while beautifully imagined and melded into John Wilson’s metallic and ever-changing set) gives us too many brightly lit scenes, often derailing moments of suspense. And director Jeff Christian’s blocking needs more dynamism; a number of scenes are framed in the same triangular format, with little movement. This show is eerie, but it’s not quite ready for your nightmares. (Zach Freeman)