by Brian Hieggelke
February 14, 2012Filed under: 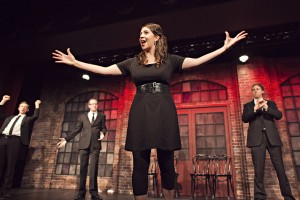 For years, if you’d ask the average Chicagoan to name the best place to see improv, they’d answer Second City. The problem was, Second City did not produce improv shows; sketch comedy is their thing. So with the UP Comedy Club, their new upstairs venue with a focus on stand-up, they’ve added a regular Monday night improv show in a sort of “if you can’t beat ’em join ’em” move.

Acclaimed comedy director Mick Napier has crafted a tightly rendered introduction to the basics of improv, broad enough to appeal to the tourist set, with bits and sketches built around audience suggestions and a recurring run of ” freeze tag,” a common improv game. On opening night, these tag bits were the weakest element of the show, as the actors seemed less interested in escalating each other’s lunacy and more inclined to simply shift directions. However, a somewhat slow start eventually gave way to some clever song creation and an outstanding improvised political debate between two actors who had to guess a rather challenging phrase concocted by the audience, aided only by miming actors who seemed to detour them as much as direct them, to great comedic effect. A short bit of long-form improv ended the show, wherein two performers took an audience scenario suggestion and rolled with it for several minutes, showing off a comfortable rapport that built characters on the fly rather nicely. The program lists a regular ensemble of performers—opening night standouts were Chelsea Devantez and Cody Dove—not all of whom will perform every time. Given its strong start, this one should evolve quite nicely as its ensemble members really get to know each other. (Brian Hieggelke)