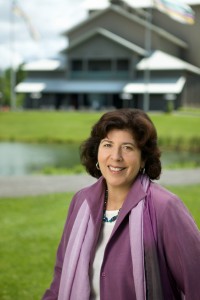 A year ago when Lyric Opera held a press conference announcing its 2011-12 season, including a new production of “Show Boat, ” then-general manager Bill Mason was asked if the N-word would be used in the production.

“I don’t think so, ” said Mason. “That is one word that you will not hear on the stage of Lyric Opera,” proudly citing the fact that when the same creative team had done Lyric’s first-ever “Porgy and Bess” in 2008, the word had not been used.

Mason was reminded that director Hal Prince—who has also worked at Lyric Opera over the years—had kept the word in his famous Broadway revival of “Show Boat” in the 1990s. Director Francesca Zambello also cut in via Skype to say, “Well, Bill, I don’t know yet.” Mason was incredulous and said, “I stand corrected.”

Sitting in an upstairs company office last week after having completed her final dress rehearsal of “Show Boat,” Zambello now says, “That’s not what this show is about. Let’s talk about something else. I hate it when that becomes the focus of an interview.”

“Is that what this interview is going to be about?”

Isn’t whether or not to start with that highly charged word the first interpretative decision that any director has to make when doing “Show Boat?” Especially since the same line comes up in “Ol’ Man River,” which is the musical thread of the show?

“The way we chose to handle it is that the more aggressive characters, Pete and the Sheriff, use the N-word, but the lyric that the chorus uses and that Joe uses is ‘Colored folks work on the Mississippi.’ We’re using the N-word for dramatic emphasis.”

And yet the N-word was removed completely in Zambello’s “Porgy and Bess.” “But there, it wasn’t in the score.” It was part of the libretto, however. “This is an approved version both ways, whether we chose to use this song or that song.”

In both cases, Zambello had to receive permission from the estates of the composers, the Gershwins in the case of “Porgy and Bess,” and the Rodgers and Hammerstein Organization for “Show Boat.”

“I asked them, ‘Why can’t we call Steve, the leading man in Act I, Bill? What difference would it make? And then when Julie sings the song ‘Bill,’ you’d connect back to him.’ They vetoed that. Julie comes on again in Act II and you’re like, ‘Whoa, yeah, I almost forgot about her.’

“That’s why I have her appear at one point in Act II in Chicago. You’re always trying to make it clear for the audience. It’s like that working with any estate, there are always pros and cons. By and large in this case, they have been helpful. We looked at the various versions, what you want to leave in what you want to cut. It took a long time to hammer out this version: I made this version, with [conductor] John DeMain.

“The version agreed upon is “about eighty-percent the 1927 original,” says Zambello, “with cuts. There was dialogue cut, some underscoring and some transitions. But we did also add back some additional songs from the later versions and some of the orchestrations are later.”

Zambello says that she got the idea to do “Show Boat” when she was doing “Porgy and Bess.” “When I first directed ‘Porgy,’ I studied ‘Show Boat’ for reference. Yes, I grew up with it the way you grew up with ‘Oklahoma!’ ‘The Sound of Music,’ it was in my lexicon, but I hadn’t seen it a lot. Of course, I saw the Hal Prince version and I had directed two versions myself: one at the Royal Albert Hall in London in 2006 and a Carnegie Hall semi-staged benefit with Nathan [Gunn], two-three years ago but that was very truncated.

“Every time it became clearer that I really wanted the piece to focus on Magnolia and her journey so that it’s not so much [her daughter] Kim becomes a star, but that Magnolia becomes a star. This woman who against all odds of being walked out on, raising a kid herself and then she becomes the protagonist of the piece, the character that you follow. The way the world shifts around her you’re seeing her. The way that society shifts, race, what happens to people on the boat, people in the South, people in Chicago, it’s all embodied in her journey.”

Zambello was also determined to keep the revolutionary spirit of the work. “This piece was a revolution in its time in every respect: a music revolution, a dance revolution, the diversity of people on stage, the fact that it’s a story about serious issues: all of that makes this show still have a contemporary feeling. Studying it you realize that ‘Ol’ Man River’ is not a lullaby, it’s really a protest song. The power of the lyrics is a lot of the piece. And for any student of music theater, ‘Make Believe’ is the beginning of the ‘if only’ duets, ‘If I Loved You,’ et al. Doing this piece you always realize what geniuses  [Jerome Kern and Oscar Hammerstein II] were in terms of structure and content.” 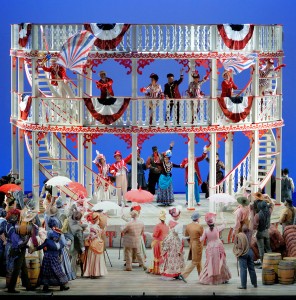 Does Zambello consider “Show Boat” a musical, an opera or an operetta? “I don’t really think in those terms, I think of, ‘What is the story, and how am I best going to get the story across?’ They’re different genres, but as a director, I will use whatever tricks I know from opera, musicals, theater: whatever it takes. I don’t think, ‘Oh, here’s my opera hat now.’

“Whether you are working on an opera or on a play, you’re still going through process and how you work is still the same: talking to people and finding the characters and finding the meaning and how it manifests itself whether through song or through speech.”

“We also knew there would be detractors, ‘Why are you doing this in an opera house?’ There has been enough ink spilled on that. Then it becomes the best mix of people and of resources: the scale of the production, the size of the orchestra, the two choruses, the two groups of dancers, principals that range from well known opera singers to an amazing pool of Chicago actors. I love the cast, I couldn’t be happier.”

Working alongside such a large cast of African-Americans in a venue that is a temple to Eurocentric art has been quite a journey for Zambello. “The work and the state of our society does definitely elicit a lot of discussion in the rehearsal room: two cultures in opposition then and now. We talk about it a lot.”

And yet, Zambello says that nothing that has happened during preparations for “Show Boat” could possibly compare to when America elected its first-ever African-American president, just as “Porgy and Bess” was about to open at Lyric in November, 2008. “That was monumental. The crying in the rehearsal room was so moving. It was an experience I will never forget.”