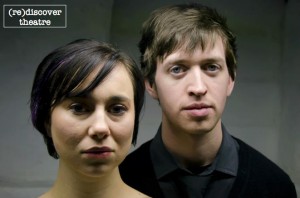 Chicago’s bustling theater scene might seem already saturated with companies, but the newly founded (re)discover theatre hopes their specific angle will help them find a bit of room in the city: Their mission is rediscovering classical theater while staying true to the ideals of the classic playwrights.

For their maiden production: Hamlet.

“Hamlet is so huge, you can’t get it right. Nobody can get it right, it doesn’t matter how long you’ve been in the business or how well you know Shakespeare,” executive director Miriam Reuter says.

Matt Wills, the show’s director and co-producer, thinks that there is no reason to get it right; there’s only reason to rediscover the play through the text, the characters and the story. Wills and the company want to find something new in a show that has been oft done.

A budget-minded decision to go minimalist and an intimate space has driven the company to focus on the relationships in the play, and they say they have found something new in the relationship between Hamlet (Jon Matteson) and Ophelia (Reuter). The minimalist approach also prompted the company to add a surrealist bent to the play. For them, surrealism is both a new and an old aspect of Shakespeare’s plays. Wills observes that back at the Globe, they couldn’t simply flash the lights or do special effects to wow the audience.

But a small space and minimal set means audience members will be closer to the action—Reuter jokes that audience members might even get a sword in the eye if they aren’t awake. And by getting closer, (re)discover hopes do what the players at the Globe did: To invite the audience to imagine with them, to play with them.

“We are finding a lot of joy in just playing, and we are really hoping that audiences will find that joy too and see that joy and share it with us—whether or not it is Hamlet in the way they envisioned it,” she says. (Caylie Sadin)