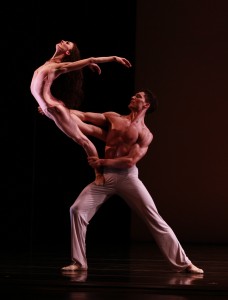 Though he collaborated with John Cage, one of the musical titans of the twentieth century, the late choreographer Merce Cunningham famously created his work independent of the music; he believed in chance so much that he once did a piece wherein the audience created individual soundtracks using shuffle mode on their iPods. I thought about this a fair bit during the Joffrey Ballet’s “Winter Fire” program, so forcefully did the music shape my perception of the three pieces being performed. The opener, William Forsythe’s “In the Middle, Somewhat Elevated,” was an abstract work where the thrilling dancing seemed as much to background the harsh cacophony of Thom Willems’ ” dissonant soundtrack. I found myself in an aggressive mood by the end of the piece, in a football state of mind. Christopher Wheeldon’s “After The Rain” could not have offered a sharper contrast. One of the most perfectly beautiful works I’ve ever seen, it features couples dancing in graceful duets to the simple yet lush violin and piano of Arvo Pärt’s “Tabula Rasa” and “Spiegel Im Spiegel.” A climactic duo takes the stage alone, and takes the audience’s breath away, notable not only for their dancing prowess but for the extreme physical juxtaposition of Victoria Jaiani’s lithe figure, a mere twig against the tree-trunk of Fabrice Calmels’ chiseled chassis. Their astonishing performance brought the crowd to its feet in response to Wheeldon’s poetry and grace. An impossible act to follow? 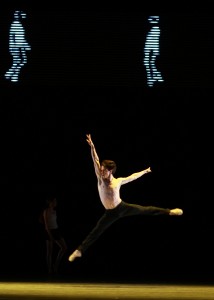 Fortunately, Wayne McGregor’s “Infra,” seen here in its American premiere (and first performance anywhere since its 2008 Royal Ballet debut in London) makes no attempt to cruise the same emotional wave. Carried along by Max Richter’s haunting score, McGregor depicts an urban dystopia (he created the work shortly after the London terrorist bombing) where duets are at tension as often in sync, where others crumble on the floor and stay put, in the dark, coming to resemble the homeless who lie at the periphery of the urban consciousness. With Julian Opie’s video projection depicting stick figures walking the urban landscape above, McGregor’s underground environment speaks to the desensitizing, to the disconnection, to the disengagement of city life, as ironic as it is when we’re in a state of proximity to so many fellow souls. Alienation contends with intimacy over and over. When a dancer gives up and crumbles in tears, as legions of fast-paced urbanites pass by oblivious to her pain, I found myself moved by the power of what I was seeing. McGregor does offer a note of redemption from this bleak tableau, ending with an isolated pas de deux, but still. It’s the heartbreak that won’t heal in this sublime work. (Brian Hieggelke)