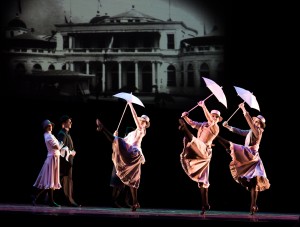 The new epoch for Melissa Thodos’ company dawned in year nineteen, carried on a beam of critical and audience acclaim for her dance-theater production about the events surrounding the Columbian Exposition of 1893. Add to that a documentary about the piece (which aired last week on PBS) and it’s a gimme that Thodos Dance would reprise “The White City: Chicago’s Columbian Exposition of 1893” for its twentieth birthday bash. That the piece is titled like a book isn’t inappropriate: the half-evening-length work is equally narrative and dancey, split into more than a dozen short episodes performed against massive set projections in period-perfect costuming. Thodos co-directed “The White City” with Broadway choreographer Ann Reinking, who together tell the now-famous tale of politics, architecture and murder with big ensemble numbers and dance-combat duets. If you missed last year’s production at the Harris, this is your chance to make good. The program also includes a collection of shorter Thodos rep through the decades. (Sharon Hoyer)