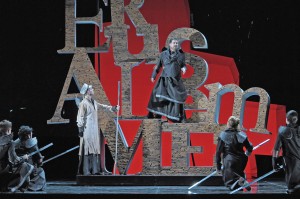 Long before the renaissance of Handel’s operas being performed in their complete form, virtually everyone knew an aria or two from his opera “Rinaldo.” Such pieces, in fact, as they were heard in vocal recitals and on recording anthologies were the only glimpse many opera lovers had into this vast world at a time when Handel operas by and large were still largely unknown to contemporary audiences.

The first Handel opera ever performed at Lyric Opera was, in fact, a concert version of “Rinaldo” back in 1984, and a year later for the Handel tricentennial Lyric staged its first Handel, though not an opera, his oratorio “Samson.” Lyric Opera has come a long way from those days when singers would stand statically and wobble their way through Handel’s vocal lines with excessive vibrato at a snail’s pace.

“Rinaldo” was Handel’s first opera written in England and was commissioned as an extravagant showpiece in its day, the British public’s first true introduction to Italian opera, albeit via a German, even the celebrated German that Handel was. He recycled many showpieces in “Rinaldo” that he had written for other operas that had already been huge successes in Italy and went for a story that was popular at the time and thus needed little explanation or character development. 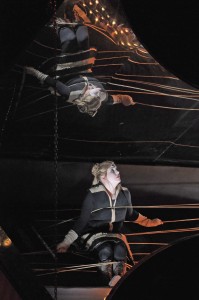 Today, the idea of an opera about Christians vs. Muslims during the First Crusade seems like a crude reminder that the more things change, the more things stay the same given recent headlines of Americans having been killed in Afghanistan for accidentally burning some Qurans. No worries. Thanks to an overblown and superficial libretto that treats the religions of both Christians and Muslims as Greek and Roman mythology as well as Francisco Negrin’s fantasy staging that removes any recognizable trace of either religion, such overtones are averted. Lest Negrin been tempted to update the story to our own time as Peter Sellars did with last year’s “Hercules,” the characterizations in “Rinaldo” are not three-dimensional enough for such a transposition to be either effective or necessary.

Those who commissioned a twenty-six-year-old Handel to write an Italian opera for the English public were above all seeking spectacle, and the original production provided that in spades complete with live horses, sparrows released on cue, even a harpsichord concerto where Handel himself would play the part as the harpsichord climax of Act II, and of course, there were the spectacular vocal pyrotechnics so associated with the Italian opera of the day done by some of the leading singers of the day. “Rinaldo” would remain the most extravagant and exotic orchestration that Handel would ever provide for an opera his entire career.

French designer Louis Désiré’s minimalist set and punk costumes seem to be going for a generic atemporal ancient fantasy-world look and yet, all evening long we are forced to look at “Gerusalemme,” i.e., Jerusalem in Italian, spelled out in a pile of grey block letters more often than not surrounded by strips of red plexiglass.

There is also what appears at first to be a giant grand piano suspended from the air for some scenes which then can become part of the action for the Act II harpsichord concerto which is done almost as eighteenth-century-like air guitar and makes for a huge distraction while pit harpsichordist Jory Vinikour virtuosically renders what is written.

Some of the lineup of singing to staging is distractingly nonmusical and often downright quirky, creating comedy where the audience is laughing out loud during inopportune moments. When German soprano Julia Kleiter is tenderly singing “Lascia ch’io pianga,” for instance, like Fay Wray trapped by King Kong we see her in the throes of the giant harpsichord whose strings are encircling her. Instead of the beautiful music, the audience is focused on the staging. No less distracting is that when countertenor David Daniels dispatches the thrilling Act I climax “Venti, turbini,” there are Baroque breakdancers endlessly gyrating, at one musically climactic point, suddenly lying on their backs with their legs kicking straight up in the air. The end chorus has even the cast making “YMCA”-like hand gestures.

Questions of staging aside and allowing for the large size of the house which does often leave the sound of the singers underfocused, the music itself is well-served with a strong, mostly young cast of early music singers. British early music conductor Harry Bicket continues to work miracles with the Lyric Opera Orchestra, a modern instrument ensemble that under his tutelage sounds as close to an original instruments ensemble as imaginable, always maintaining delightful energy, momentum and sense of swing. (Dennis Polkow)