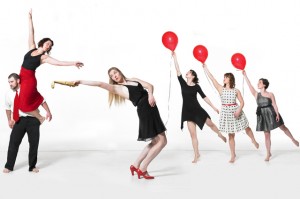 Aggression, territoriality and myths of masculinity emerged as central themes when Synapse Arts founder Rachel Damon, independent performance artist Erica Mott and the all-female dance collective the Space/Movement Project applied to share a bill at the Dance Center of Columbia College. The venue, either consciously or sub-, no doubt influenced the subject matter: the Dance Center is a big step for all three Chicago-based companies. Watching Damon rehearse one of her quartet numbers in a small third-floor studio in Wicker Park, I got an inkling of the challenges a choreographer faces when they create movement in a space one-fifth the size of their performance environment.

Our post-rehearsal conversation became about more intimate spaces. “I’m fascinated by territory as a human and martial artist,” Damon tells me. “You learn in that training about the red zone, the personal space between people.” She leans toward me, her face about six inches from mine. “This is a little less comfortable if we don’t know each other than…” she sits back to a socially acceptable two-foot remove, “that. Your brain responds to that space in one of two ways—you can go down the intimate track where I trust this person or you can go down the defensive track. The intimate track is a lot more cognitive-based and the defensive track has a lot more to do with back-brain, my lizard sense going off. That’s where the churning comes from: stirring up the space.”

The churning happens in circles: big ones made by dancers running backward around the floor, surrounding a soloist at the eye of the storm; small ones made by partners clasping one another’s elbows and body-rolling off each other’s energy; smaller still on the internal plane, made by spines and limbs, dictated by waves of breath. Other circles will be inscribed by rolling platforms with buckets of water—water destined to splash across the stage and the dancers, deteriorating the sets as the dancers succumb to their animalistic responses.

Erica Mott has the scope of the venue very much in mind, planning to exploit the broad expanse of the Dance Center stage in her theatrical piece for four men that compares cowboy and Viking archetypes, using massive weather balloons to evoke images of vast skies and monumental landscape features. Mott was inspired by time spent in Iceland, where she found more signs of country western culture than Nordic lore, and residency in Santa Fe, where she worked both with cattle ropers and a Viking reenactment group.

“There’s a strong vein of the outlaw running through both,” Mott says. “Both have to do with the eschewing of property and worldly goods. And then of course the over-the-top machismo depicted in Hollywood versions of both, versus the realities and hardship of living those lifestyles at the time.”

The evening is designed to progress from danciest to most theatrical, starting with the Space/Movement Project’s “Kiss Kiss Missiles,” inspired by social and folk dance, proceeding to Damon’s “Without Pause” and concluding with Mott’s “Five Gaits, Four Walls, Fourteen Knots.”