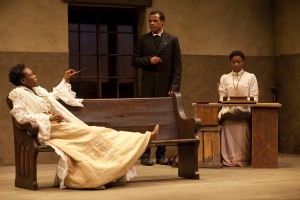 There is something decidedly conventional in the structure of playwright Danai Gurira’s “The Convert,” now in a three-way world-premiere production at the Goodman, the McCarter Theatre Center in Princeton and Center Theatre Group in Los Angeles. The historical drama, set in Southern Africa during the early days of Victorian British colonialism in what became Rhodesia and later Zimbabwe, centers around a devout Christian catechist and his cultivation of a “savage” into a highly effective protégé, sounds very much like something we’ve all seen before. And its three-act structure and three-hour-fifteen-minute running time are most definitively retrograde in an era of one-act eighty-minute shows. But something more is at work here. Especially novel for the audience of overwhelmingly white and white-haired patrons at the Goodman, I suspect, is the depiction of this world without any Brits (i.e. white characters): No colonialist with a heart of gold, for example, who perceives the true nobility of the savages she’s been sent to simultaneously save and subjugate. Instead, the seemingly British perspective is conveyed through the character of Chilford (a marvelous performance by LeRoy McClain, who manages just the right amount of inner turmoil below the surface of his steadfast demeanor) and his cohort of educated Africans who speak English, dress in a Western style and see themselves as leading their people out of the primitive pagan ways and into the modern Christian culture of the white man. But they are a small minority, with most of their African peers not so welcoming, and the tension between the notion of Western cultural superiority and the simple quality of life that the native Africans enjoyed before their continent was overrun drives this play into fresh territory.

Director Emily Mann keeps what might have been a plodder moving at a crisp pace, notable not only given its length but also the fact that most of the action takes place offstage and is simply discussed in the static setting of Chilford’s home. It doesn’t hurt to have an outstanding ensemble cast, especially Pascale Armand who, as the “reformed savage”  Jekesai/Ester, delivers a captivating performance, beginning with her entrance, that never lets up. When she’s on stage, it’s hers.

As quaint as the idea of taking the “savages” of Africa out of the “dark” and into the “light” via Roman Catholicism might seem today, our belief in the innate  superiority of our culture and our religion show little signs of irrelevance, with this era’s pervasive attempts to export democracy everywhere it’s not wanted, and to paint Islam as a primitive, violent and misogynistic religion without seeing the faults in Christianity keeping us pretty much exactly in the same place. (Brian Hieggelke)