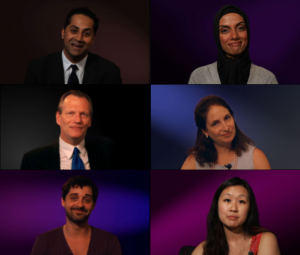 Theater is moving online. Sure, poorly and often surreptitiously filmed stage productions already get uploaded to YouTube, but a pair of Chicago ensembles are taking a new, digital-first approach. Silk Road Rising and a collaboration between Octavarius and CNGM Pictures, have decided to create their theater on the web so that their work can be accessed by people who wouldn’t otherwise be able to see it.

On one end of the spectrum, Silk Road Rising, founded in 2002 by Malik Gillani and Jamil Khoury in response to the 9/11 attacks, has a specific and serious goal. They want to promote and encourage conversations about the interaction of different cultures. “The idea of taking hot-button culture-war issues and having this artistic and civic engagement component makes this organization really relevant and timely, which was the purpose behind the company,” says Khoury.

Silk Road Rising started their journey in a strictly live theater way. But after a few years, they started hearing from people outside of Chicago and the United States who were interested in the issues that they were discussing but couldn’t attend their live shows. “It was an audience that was not in proximity and we needed to connect with that audience,” Khoury says.

In order to reach them, Silk Road Rising turned to the Internet. Instead of just presenting a finished theater project, they are asking their audience for advice on the characters, the plot and the play itself—”Mosque Alert.” Set in Naperville, the idea came to Khoury because of the controversy surrounding the so-called “Ground Zero Mosque” in New York. He started looking  into the issue and found that there were similar instances of resistance to the building of mosques all around the country, including in Naperville.

Silk Road Rising set up the site so that as the play progresses, people can weigh in on each part—the prologue, the characters (who talk about their beliefs and values in short, monologue video pieces), and conflict scenes.

The piece is divided into segments, making it more accessible; no need to watch it all in one go. In fact, taking a break between portions can be part of the process—you can comment and share your views with the ensemble and the rest of the audience. It’s like a constant talk-back session after a play.

There is a vlog, or a reality-TV-show element to these pieces, but at the same time, there is a different, more serious feel to it—something closer to traditional theater. The pieces continue to develop in response to viewer feedback, but in the future, Silk Road Rising plans to put this up as a live, final theater piece also available on the Internet.

In the meantime, they’ll keep doing live theater as well. “Our plan is to use the two to feed each other. At the end of the day it’s about fulfilling the mission in the most cost-effective manner and reaching a large number of people,” says Gillani. 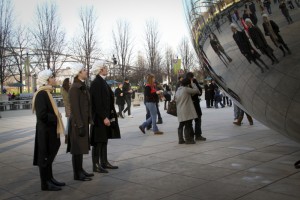 On the opposite end of the spectrum, Octavarius and CNGM Pictures have come together to create a romp through all different kinds of online mediums—Twitter, Facebook, videos, music, OkCupid and more—which they combine with recorded live outings. Their project, entitled “I Made America,” follows six founding fathers as they navigate modern-day Chicago.

Contemporary politicians running for president have brought founding fathers forward in time, hoping for  an endorsement. But the men transported from the 1700s slowly start to venture more and more into everyday life. Of course, they discover the Internet. (And other inventions, like Pop-Tarts. Benjamin Franklin really likes Pop-Tarts. He likes them so much that he made his own video talking only about them.)

Marc Muszynski, creator and executive producer, came up with the idea four years ago. But he knew from the beginning that he wanted the show to be linked with the presidential election, so he waited. And as he waited, he realized he was surrounded by a wealth of talent. His friends all had different skills, including in video editing, music making, acting, PR and social media. So he thought that perhaps they could all come together to make a project like no other.

“We’re trying to do something that encompasses different unique medium, unique interaction that you can Facebook share,” Muszynski says.

The reaction from viewers has exceeded expectations. In the story line, the founding fathers’ electricity went out. One girl contacted them and told them that she had candles if they wanted them. They met with her and Franklin gave her a letter in exchange for the candles. Some fans have also sent them drawings and other fan art. These viewers, by playing along, have become characters in the play.

“If you interact with them, you become a character in the story, creating entertainment with people. It’s kind of a big feeling, touching something a lot larger than you normally do,” Muszynski says.

When the fathers go out to sing karaoke or ice skate, everyday people get a chance to become part of the story too. Reactions to their live outings have come in two forms: heckling and playing along. The vocal disbelievers usually quit after a few attempts to “disprove” the founding fathers’ existence, because they figure out that it is less fun to naysay than it is to play along.

“The main reaction that people give us is super positive,” live performance producer Brian Wohl, who plays John Adams, says. “People are so excited to see the founding fathers out. Everybody just wants to come out and talk to them.”

The main project will cover ten weeks, each week having its own webisode along with other content. Muszynski hopes to find the funding to bring the series back for another “season.” They hope that using all of these different mediums to tell one story will transform the way that we all tell stories.

Check out “Mosque Alert” at silkroadrising.org/video-plays/mosque-alert and “I Made America” at imadeamerica.com