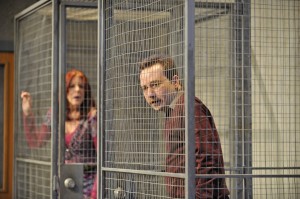 A powerful work of dystopian agitprop, “The North Plan” depicts a grim and far too plausible nightmare in which America’s Department of Homeland Security is exercising totalitarian powers under the guise of restoring order after some unnamed “incident.” As disturbing as Jason Wells’ play is, it’s just as hilarious. That’s because, in a part that could have been written for her, Kate Buddeke roars and soars as Tanya, a South Missouri redneck who stumbles into a situation far more intense than she imagined when she soberly turned herself in for what would otherwise have been an unobserved act of drunk driving. Though her cellmate is far too serious to match her over-the-top antics, Kevin Stark’s Carlton manages to hold his own as the State Department official “gone rogue” in the name of preserving human rights. Tom Hickey and Brian King, as the DHS agents who take him into their “care,” are frighteningly stern feds channeling Laurel and Hardy.

Kimberly Senior, who directed this play at Steppenwolf two years ago as a fully staged developmental production, has not changed it much:  she nailed it the first time and has done so again. The show crackles with wit and energy even as it turns darker and darker. 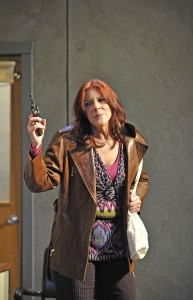 I wish I could report that, two years deeper into the Barack Obama administration, the premise of the show, the complete suspension of civil liberties in the name of homeland security, was becoming increasingly far-fetched, but alas our Democratic president seems to have actually worsened the terrain, with the NDAA, which allows for the indefinite retention of suspicious citizens without warrant or trial, and the unprecedented premeditated assassination of an American citizen without trial. In other words, it’s more relevant than ever.

Rounding out the cast are Lucy Sandy as a somewhat sympathetic administrative officer and Will Zahrn in a fine performance as the local sheriff. Though the play’s evenly balanced with a cast of three “locals” and three feds (include the self-righteous renegade)—it’s clear that the playwright puts little faith in the national government’s moral compass. For him, it’s the “little people” in the localities who keep hope alive. (Brian Hieggelke)