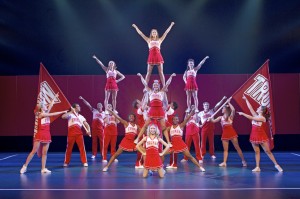 Attempting to trade on the success of “High School Musical” and the myriad of musicals-derived-from-popular-films shows, “Bring It On: The Musical” is in part a corporate creation of Universal Pictures Stage Productions based on the studio’s popular 2000 cheerleading movie. The show has an impressive pedigree on paper with a host of Tony Award winners that include a libretto by Jeff Whitty (“Avenue Q”), music and lyrics by Lin-Manuel Miranda (“In the Heights”), music by Tom Kitt (“Next to Normal”) with direction and choreography by Andy Blankenbuehler (“In the Heights”).

Currently halfway through a pre-Broadway tour, the show is still quite cumbersome in its current form, and that’s not counting what scenes and songs may have already been cut along the way. Like “In the Heights,” this is a show that is both through-composed for many scenes, which is to say, huge portions of the dialogue are set to music, and yet the show is also excessively chatty between the musical portions. Unfortunately, there is a serious disconnect between the dialogue and the songs, which are rarely melodically driven or interesting musically.

The show opens with a Valley Girl soliloquy that becomes a sung prayer about how a cheerleader discovered the love of cheerleading. It is an astonishingly low-energy start to the show and we have to almost get to the end of the first act before we get a high-energy number, an Act I finale that really should start the show. This is one of those white-messianic-figure-infiltrates-the-hood-and-shows-them-all-about-themselves plots; in this case, via cheerleading. And then the hood helps the heroine get revenge on her rival bimbette.

There are two aspects to this show that make it endurable: the spirited athletic choreography and the energetic dance performances. I never bought for a minute that the lead actresses were high-school girls, not only because of the acting, which is plastic, but more damningly, the dialogue, which is sappily representative of adults attempting to look back at this period of life rather than any actual attempt to credibly recreate it. 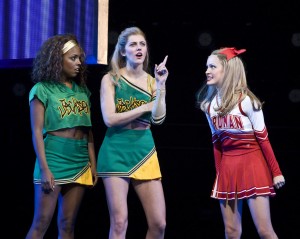 One of the boys, for instance, sings an entire song about the janitor giving him sage advice in the stall of the men’s room about savoring high school while he can—you know, the kind of drivel that goes in one ear and out the other when you’re actually IN high school—a theme that is taken up by the leads, without help from the janitor, who note that in high school “time goes by in a blip, so be sure to enjoy the trip.” The lines are not much better than the lyrics: when the black girlfriend feels betrayed by the white friend who invaded her world, she gives her a speech worthy of Dr. Phil about betrayal and friendship until another song rolls around. And so it goes.

It is hard to judge how much of this two-and-a-half-hour show—which feels epic-like—is rescueable in its current form, but of its twenty-three songs, easily a third of them could go, as could a third to half of the dialogue. We get it: two rival cheerleading squads have a face-off. If some of that time were spent on character development so that we come to care about the principals that would be one thing, but it is used for gags and one-liners more worthy of an after-school special than a Broadway-style musical. There is little heart here, but a lot of jumping around, albeit, superbly and athletically executed. (Dennis Polkow)