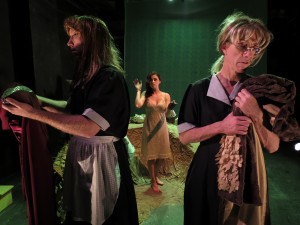 Jean Genet was the literary patron saint of the outcast. A petty thief who spent his youth in juvenile institutions, Genet identified with those on the fringes. “The Maids” exemplifies Genet’s attempts to dramatize the struggle of the oppressed; the piece takes inspiration from the 1933 Papin sisters case, in which two maids murdered their employer and her daughter.

Oracle’s production captures the self-loathing and weary madness of two maids who compulsively re-enact the murder of their fragile employer. Solange (Rich Logan) and sister Claire (John Arthur Lewis) torture Madame (Sasha Grishkov) and themselves as they explore the grinding inequity of French society. The performers get bogged down by the artifice of drag, letting the attempt to recreate gender stand between them and their soul-crushing economic circumstances. But they manage to master Genet’s language and hammer the point home: servitude destroys dignity and a lack of dignity destroys life. (Lisa Buscani)