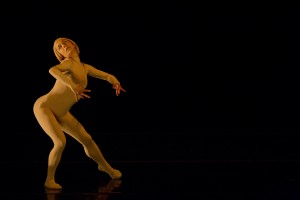 Rare is the artist who can produce thoughtful, rigorously crafted work on a regular timetable. Alejandro Cerrudo has proven to be one of those gifted individuals in his tenure as Hubbard Street’s resident choreographer, turning out movement gems of stunning clarity and beauty year after year. “Little Mortal Jump, ” a premiere on this program, is his tenth in three years. Granted, he’s been given a remarkable resource—the Hubbard Street dancers—and has epic plans for their considerable talent this fall…but more on that later. This program also includes reprises of two works that premiered last year: a lovely neoclassical piece by Alonzo King, artistic director of LINES Ballet; and hypercool “Too Beaucoup” by Sharon Eyal, house choreographer for Batsheva Dance Company (performing down the street the same weekend).Inspired by digital visuals and 3-D technology, the aesthetic of “Too Beaucoup”—established equally by lighting, costuming and movement—feels like a concentrated abstraction of a William Gibson novel. Depeche Mode, Gang of Four and Vicious Pink in the score help too. (Sharon Hoyer)