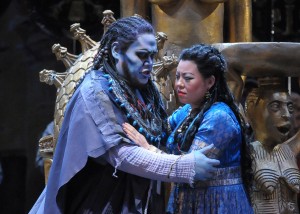 On paper, at least, the first cast of Lyric Opera’s production of Verdi’s “Aida” that opened in January looked as if it would be the premier cast, and indeed, had a lot going for it with Verdi heroine extraordinaire Sondra Radvanovsky as Aida, Italian tenor Marcello Giordani as Radames and mezzo soprano Jill Grove as Amneris. And yet for all of its superb singing, somehow the dramatic intricacies of the love-pyramid aspect of the opera left much to be desired.

The second time is the charm, as it were, for those who want high drama with glorious singing. Making a spectacular Lyric Opera debut is Chinese soprano Hui He, all that you could ever ask for in an Aida. Not only does He sing with a voice powerful enough to fill the rafters of the Civic Opera House—a rare find these days—but she does it with purity of tone and with immense attention to Verdi’s dynamic markings. Her pianissimo high notes float beautifully; He never feels the need to show off how loud she can bring off her high notes as Radvanovsky likes to do. He is also able to flesh out the character of this tormented lovesick princess who keeps her dignity while serving as a slave in the court of a country with which her own nation is at war.

Particularly memorable are the scenes with her father Amonasro, taken over for the March run by Hawaiian baritone and Ryan Center alumnus Quinn Kelsey, offering his most impressive role at Lyric to date. The dark yet lyrical quality of his voice is blossoming wonderfully and Kelsey is really coming in to his own both vocally and dramatically as a major Verdi baritone. 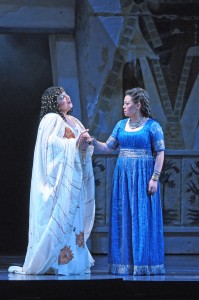 As Aida’s rival Amneris, Russian mezzo soprano Anna Smirnova is as delightfully scheming as one could hope, yet achieves genuine empathy for her character, no small feat for a woman whose fierce jealousy dooms her love. The voice is a large one and capable of extraordinary color, though she began too strong on the opening night of this cast change, recovering by the second act.

The wild card of the new cast is Italian tenor Marco Berti who, on opening night at least, was off to an unfortunate start by straining to reach the climax of “Celeste Aida” only to have the note degenerate to a pitched gurgling sound. Had it been left to that, it could have just been a fluke, but this remained a problem all evening: it was as if he was having to switch gears to get into the upper register and when he did, the results were unpredictable, particularly in the Act III love duet with Aida. Thankfully, he recovered for the end of the act and also managed to get through the Act IV tomb finale without incident. He was very careful never to press her advantage; she always cut off with him and tailored her dynamics accordingly.

In the same way that time had not diminished a wonderful production such as August Everding’s “The Magic Flute” presented earlier this season, time also does not manage to improve a production: this static production of “Aida” now nearly thirty years old and seen here on numerous occasions, was tiresome when it was first unveiled. However, the blue chorus of Nubians has come to look a bit less distracting after “Avatar.”

Still, it was wonderful to see a complete “Aida” with both of these casts, complete with the entire dance sequence and exquisite choreography by Kenneth von Heidecke. For having no animals on stage, the Triumphal scene still manages to give a semblance of spectacle with its double quartet of natural trumpets and a parade that seems unable to make up its mind where Pharaoh should be during the proceedings. The Lyric Opera Orchestra and Chorus—superbly prepared by Michael Black in his best work all season—is in its element under the direction of Italian conductor Renato Palumbo, whose brisk tempos were more in sync with this cast than the first. (Dennis Pollkow)