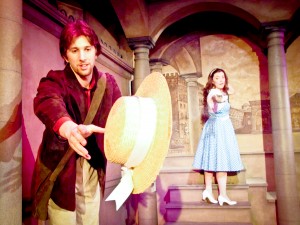 After being developed at the Goodman Theatre almost a decade ago and heading off for a very successful, multi-Tony Award-winning Broadway run, “The Light in the Piazza” is having new life as a regional theater piece.

This is a show with a lot of heart and, as a love story, it succeeds wonderfully well, Adam Guettel’s naively optimistic score serving to intensify the emotions of the characters. The problem has always been with the source material itself: A novella that became a famous movie sans music, the work is shrouded in a mortifying 1950s sense of shame when it comes to mental deficiencies, whether real or imagined. These are things that simply weren’t talked about in those days, and it being the major plot device here reminds us of how far we have mercifully come.

What is particularly gratifying about the Theo Ubique production is how well the intimacy of the space of the No Exit Café so perfectly brings out the best of this work. It is fundamentally a love story, after all, and though you wish that the chemistry between the leads would generate more sparks than it does, Justin Adair’s Fabrizio is charming and he sings the role like a dream, and Rachel Klippel’s Clara is vulnerable and her singing, though a tad over the top at times, preserves the innocence and integrity of her character. A good Fabrizio really has very little to do other than fall in love with Clara, but Klippel’s Clara becomes a young woman in this show in the second act in the way that she stands up to her well-intentioned but overprotective and domineering mother, played by Kelli Harrington, also a fine singer, who also needs to reign it in a bit at times.

Directors Fred Anzevino and Brenda Didier do a wonderful job of letting the story unfold via the music, which is left in the wonderfully capable hands, literally, of pianist and music director Jeremy Ramey who has minimized the schmaltz factor of the score by letting go of some of the Liberace-like arpeggios and keeping a tight but effective acoustic orchestration of piano, harp, violin and bass viol. Anzevino and Didier never let us forget that there is a dark underside to the story in that a daughter has just as much right to have her shot at her own happiness as her mother did and that despite their mental differences, Mom has already failed, the daughter has nowhere to go but up.

Some of the Italian accents were still a work-in-progress but others were superb, especially in the family scenes. The utopian Italy of this show has never really existed, but it is a wonderful place to visit for a couple of hours in any case. If you come early enough, the cast will even serve up pasta for you. (Dennis Polkow)