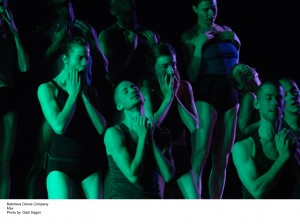 Without fail, Batsheva elicits breathy wows from audiences worldwide—not for acrobatics or acts of contortion, but for a superhuman precision in phrases that slow down and speed up in a way that’s hard to grasp. You can almost feel the people in the surrounding seats rubbing their eyes and blinking with disbelief. Ohad Naharin, the visionary director of Batsheva, developed his own movement awareness approach, dubbed Gaga, that’s anchored in refining the dancer’s presence within the moment and a notion of there being “plenty of time.” The Batsheva dancers have so conquered the constraints of time it sometimes seems like they’re dancing outside the matrix. The Israeli company comes to the Auditorium Theatre with two of Naharin’s pieces: “Max,” a fascinating movement deconstruction for ten dancers and “B/olero,” a duet set to Maurice Ravel’s music as interpreted on synth by Japanese composer Isao Tomita. Do what it takes to see this company. (Sharon Hoyer)