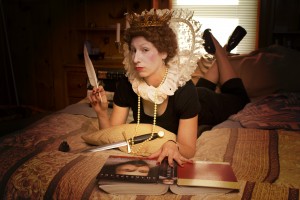 Commedia Beauregard deals in translations of all kinds. Their first play in Chicago, “A Klingon Christmas Carol” was a translation of the traditional “A Christmas Carol” into the language of the Klingons from Star Trek. But they also transformed the play as a whole to fit into Klingon culture. So, in a way, it’s no surprise that their new project, “Bard Fiction,” is a translation of the movie “Pulp Fiction” into Shakespearean verse and culture.

Director Christopher O. Kidder takes translated works very seriously and believes that in a way translation is an art, each word chosen carefully, not just for pure meaning, but for subtext and deeper feeling.

“We treated it as a play written by William Shakespeare,” Kidder says.

The “Shakespearean” translation of “Pulp Fiction” began as the idea of a blogger, who made a Wiki page for it. Many different people joined the collective online project, writing and rewriting the play. Later, Ben Tallen, Aaron Greer and Brian Watson-Jones stumbled upon it and decided to use some of what was there to create an hour-long play for the Minnesota Fringe Festival.

“Largely what we have tried to do is to treat this as if we were trying to reconstruct a missing Shakespeare play, keeping the plot as intact as possible and setting it in Shakespearean London,” says Greer.

Josh Zagoren, who plays Vincent de la Vega, loves the meticulousness of the script. Zagoren acts in one of the most famous scenes from the whole movie, the “Royale with Cheese” scene. It’s in the play—translated into something that makes sense in Elizabethan society. Zagoren says he must work hard to walk the thin line between Bard and “Pulp.” He’s attempting to create something more than a farce, something that stands on its own, something that everyone can understand.

“Something like this is impressive,” Zagoren says. “It makes theater accessible to normal people. And I will say you can bring kids to this one, because we do swear but they will have no idea what we’re talking about.”

Zach Livingston plays Butch and is responsible for ensuring the violence that permeates Tarantino films translates to the time period and to the stage. Self-described as a “pretty big ‘Pulp Fiction’ dork,” Livingston has seen the film many, many times. What struck him the first time he saw the film was the way that Tarantino treats violence.

Because “Bard Fiction” substitutes the ubiquitous guns of “Pulp Fiction” with Elizabethan-appropriate knives and daggers, Livingston had to figure out how to make sure when one character knifes another character, it has a similar dramatic effect as shooting does in the film. Inherently, they’re very different actions: Sticking a knife in a person is very personal, and it takes as much determination to pull the knife out as it does to put it in. On the other hand, shooting someone can sometimes be very impersonal. Livingston impressed upon the actors how intimidating a knife would be in those times, and that they needed to react to someone pulling a knife as if that person had pulled a gun.