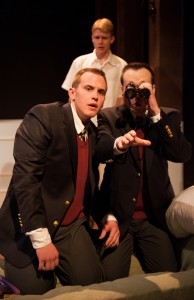 Masculinity is not easily defined; most men don’t know what it means to be a guy, much less  most women. Playwright Robert Anderson attempts to answer this question. It’s just difficult to hear it over the creaking of the 1953 script.

He endures the abandonment of roommate Al (a sympathetic Nick Horst), and endures his father’s (Kevin Gladish) and housemaster’s (Peter DeFaria)  attempts to butch him up. Worse, he suffers the pity of his secret crush, the housemaster’s wife Laura (Kate Tummelson).

Tummelson brings a 1950s gamine quality to the role, and she and Cutler make a pair to root for. Points to the entire ensemble for playing the script straight when some lines just beg for a wink and nudge. While the subject remains viable, Anderson’s approach needs some serious dusting. (Lisa Buscani)