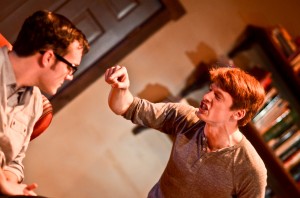 Before Lucas Neff was known for his role as Jimmy Chance on Fox Television’s “Raising Hope,” he was writing plays. The first time he wrote a play, it was mainly to impress a girl that he was dating at the time.

“It did more damage than good,” Neff says. “Luckily it blossomed and flowered into an authentically deep and personal passion.”

One spark for his most recent play, “The Last Duck,” was his recognition of the hypocrisy around him and in his own life. He also wanted to explore a different technical style. Neff had been writing epic plays—one a South Side Irish female “Hamlet,” the other “The Odyssey” meets “Othello”—and he wanted to get back to the simple Chicago storefront theater he had grown up watching and loving. Neff wanted to take on the seemingly simple story of two people interacting.

Writing the play started out as a psychological experiment for Neff. It’s about a writer and an actor, and—as the script dictates—both actors must play each role. One night, one actor will be one character and the next night, the other character. “The Last Duck” is a self-examination of the duality of the artistic process Neff found in himself.

The duality of casting helps the audience explore the more meta-theatrical elements in the play and offers a window into an actor’s play-creation process.

Neff wasn’t afraid to create a challenge for the actors who would eventually play the roles he wrote. He wanted to see how they would solve the puzzles he wrote for them. The script doesn’t specify gender, age or race for the roles. Neff says he wanted to see if the truths that he was trying to write would carry over no matter who was playing the part, and was interested to see if it would help him discover things about himself to see people completely different from himself play these roles.

Plus, Neff says, “I’m tired of seeing white men in plays. I wanted to write a play that wasn’t just for white men. And of course, we ended up, in an open casting, casting two young white men. You gotta go with what’s there. At the end of the day, these were the most right actors for the parts of the actors that were available for us to look at,” Neff says.

For the inaugural production of the play, Neff is happy that they went with a mirrored casting, because of the role-switching. He thinks it’s probably good to see what the bare bones of the script is before having different ages, sexes or races play the roles opposite each other.

Director Marti Lyons wanted to make sure that when the actors switched over they didn’t just play the other person’s character. She approached the whole thing as two separate plays. The initial character discovery phase was done individually by each actor, and she says the different actors’ characters have very different inner lives and motivations.

“Essentially it’s building two plays simultaneously. And we had to figure out how to not steal our own ideas from one version to another,” Lyons says. 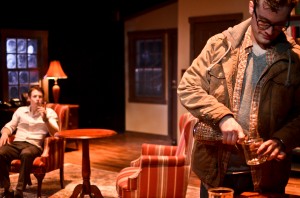 During rehearsal, they would have one week of rehearsal for a part of a play, then the next week would be a rehearsal for the opposite casting show, allowing the actors to follow their impulses organically.

Lyons has taken great care to attempt to preserve that separation between the two shows. For instance, the play begins with an opening monologue with only the one character on the stage. Neither actor has seen the others’ monologue. Following that separation, even the costumes, lighting and blocking are different. The designers were in on the rehearsals and took inspiration for the characters from the ways that the actors played them. There are some carryovers and some things that are the same from version to version, but many aspects differ. Essentially they had to have two different technical rehearsals, one for each play.

“For a while I thought it would be the differences that would make it more compelling for the audience, but now I actually think it’s the similarities. It’s like when you are watching something that is the same moment but it totally isn’t, it’s fascinating,” Lyons says.

Neff does hope that audiences will find it funny. The play itself is short, only about eighty minutes, and is very character-driven. He stresses that it is about the magic of what happens between people.

“If you find really dark, awful things funny, you should have a good time at this play. And if you’ve got some passion in your soul for the world at large, then maybe this is your cup of tea. Also, it might be awful and I take no responsibility,” says Neff.