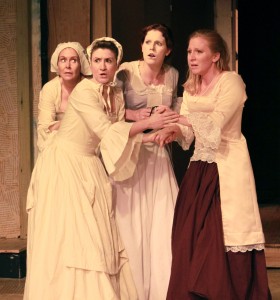 Director Maggie Speer has a lot of work to do in getting her version of playwright David Hammond’s lengthy adaptation of Henry Fielding’s eighteenth-century novel ready for the stage. As it stands, each member of this seventeen-person cast seems to be not only in a different play, but in an entirely different theatrical world. Some actors come rushing on stage full-force, bellowing and gesturing frantically, while others speak in hushed tones that hardly project to the second row, even in this small space. Sometimes her actors portray dogs and even trees, which neither heightens nor clarifies the scenes but only serves to distract. The set design doesn’t help: four sets of shaky double doors make for more than a few awkward entrances and exits. Both the comedy and the tragedy are lost in the resulting confusion of this nearly three-hour production. Still, Jonathan Beal stands out as a simpering villain. (Zach Freeman)