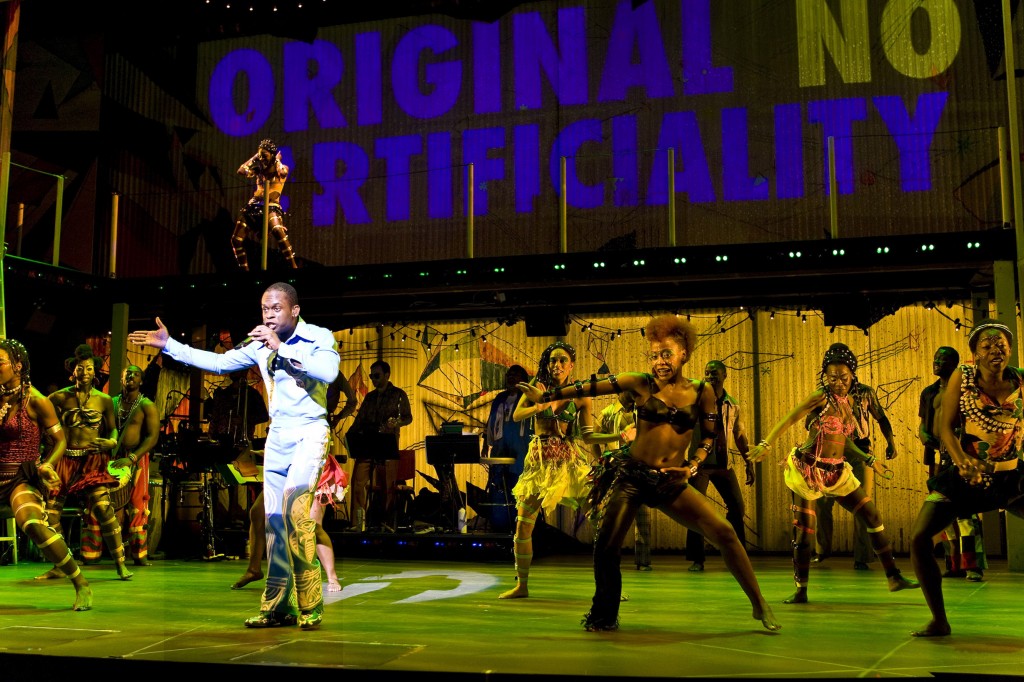 Some called him a prophet. When he died of AIDS-related causes in 1997, more than a million people attended his funeral.

And now Fela lives. At least as long as Tony nominee Sahr Ngaujah is playing him on stage, the Afrobeat pioneer and political activist from Nigeria is brought to life in an astonishing performance. Ngaujah sings with his explosive band, grabbing a sax and taking the instrumental lead on several occasions. He dances with his “queens” and vamps effortlessly with the crowd in a show designed to portray the final show ever at his Lagos nightclub, The Shrine. He rouses the audience with his story of fierce activism in trying to change his corrupt government, even in the face of immense persecution and personal loss.

Some might complain that the show is less theater and more concert. And indeed it is, but it is so much more than a concert; it is spectacle, with a set design that evokes its namesake club but also manages to successfully ground it in a distinct time and place, making use of video footage, both archival and contemporary, as well as lighting so dramatic at times (especially during a Yoruba ritual designed to reconnect Fela with his mother, a political martyr) that it almost becomes a rival to the man himself for showmanship. 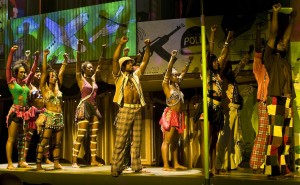 Almost. Ngaujah is joined onstage by a troupe of dancers who elevate a frenzied energy level, fusing African dance with ballet techniques; it’s no surprise that director Bill T. Jones is a renowned contemporary dance choreographer. The dance alone could stand on its own if you could take your eyes off Ngaujah. And the cast assembled for Chicago is world-class; Ngaujah is joined by two London co-stars, Melanie Marshall as his mother and Paulette Ivory as his lover-mentor, Sandra. Both bring superlative voices and charisma to a stage already full of it.

Fela’s story is remarkable and it is a necessary shortcoming of this type of show that, in order to maintain the concert-like energy, the narrative takes a back seat to the song and dance. Here Fela’s story is parceled out in bits and pieces by Ngaujah in the form of between-song banter that creates more of an impression of the man than a distinct biography. That being said, it’s a compelling and accurate overview that connects not only his key political turning points and struggles, including the death of his mother after soldiers threw her out of a second-floor window of the club and the brutal rape and torture of his wives, but also depicts characteristics that detractors might focus on, from his prolific pot smoking to his polygamy (at one point, he married twenty-seven women, all connected to his show as dancers or collaborators).

If you like your “bass down low,” you’ll love this show. I can’t imagine the floor of the Oriental ever resonating with the vibrations familiar to anyone who spends time in the dance club the way it does here. It’s like house music heaven. In fact, this is a show that should be watched on your feet, with a beer in hand and dancing in the aisles (unfortunately neither a reality here). As Kuti said, which also became the name of a compelling documentary about his struggle, “music is the weapon.” Expect to be slain. (Brian Hieggelke)