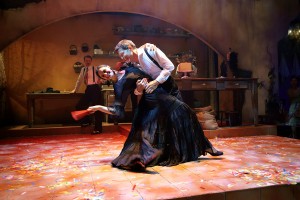 By placing the audience around communal tables (loaded with purchasable wine and beer) in a setting that manages to feel like a restaurant with a theater in it rather than the other way around, this delectable mix of Cirque du Soleil and fine dining helps establish a relaxed sense of camaraderie between audience members well before the on-stage theatrics begin. The thirty minutes prior to showtime are spent marveling over margaritas and appetizers with fellow patrons rather than just settling into assigned seats.

The show itself pulls from the Cirque model of a loose plot that feeds into opportunities for visually impressive feats of athleticism, which are expertly delivered here by a cast of world-class performers, often immediately after consuming one of the many stirring recipes created by Cook (co-creator Rick Bayless). The mixing of food and theater goes a bit further than this, though, with the audience typically dining at the same time as the cast, allowing for a deeper connection to the smells wafting from Cook’s kitchen and the ecstatic (and usually sensual) reactions of the cast.

Though he is the central character (with his name appearing over the title of the show), Bayless actually plays a smaller part than expected, most likely keeping in mind that too much of even the tastiest spice can completely spoil a dish. Instead he watches quietly from the kitchen, interjecting only to request ingredients and make attempts to get the reclusive lady of the house (Chiara Mangiameli) to try his food. It’s a performance that showcases a clear appreciation for quality over ego.

The elaborate workings of this show clearly required masterful planning from co-directors (and co-creators) Tony Hernandez and Heidi Stillman, but the lighthearted way it’s all delivered, creating an environment of constant wonder and surprise, makes it even more affecting. Passionate, hilarious and, above all, authentic, Cascabel is truly a singular experience. (Zach Freeman)