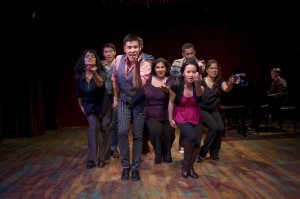 Consider the holiday that many Americans just celebrated: a god, with a three-part persona, is one-third executed, only to return from the dead in, natch, three days. And part of the celebratory ritual is an act of metaphorically cannibalizing the deity. And, to top it off, add in painting the eggs of chickens and a mysterious rabbit who delivers confectionery fauna. Pretty exotic stuff if you were an alien or even just raised on the other side of this planet. This is the kind of cultural self-examination that “Re-Spiced: A Silk Road Cabaret” brings to mind as its cast of color plows through a carefully organized songbook of American and British tunes old and new that address, in some way, Asian and Middle Eastern themes. Woven into a clever and entertaining pastiche of songs, many focused on the “exoticness” of the East, are text excerpts drawn from the Western canon, the likes of Walt Whitman, Edith Wharton and Friedrich Nietzsche that punctuate or counterpoint the verses. As staged by director Steve Scott and choreographer Brenda Didier, the show succeeds on the basic level of being an enjoyable cabaret sung and danced with vigor and verve by a cast long on Asians and short on Caucasians. This casting alone creates a running reinterpretation of the texts and lyrics on stage without the need for any overt polemical shading, whether it’s acquainting contemporary audiences with the lyrics to Harry Warren and Mort Dixon’s “Nagasaki” from 1928, long before that city became tragically synonymous with atomic destruction (“Back in Nagasaki/ Where the fellers chew tobaccy /And the women wicky-wacky/Woo”) or giving a whole new level of peril to Toby Keith’s anthemic “Courtesy of the Red, White, and Blue.” And that points toward the most brilliant aspect of this show: the impressive and even-handed breadth and depth of creator Jamil Khoury and dramaturg Neal Ryan Shaw’s topical crate-digging (even if, at ninety-five intermissionless minutes and forty-plus pieces, the show feels about ten minutes long). (Brian Hieggelke)