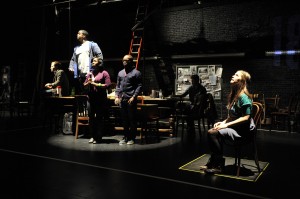 “The tools of the theater are not the same as the tools of journalism.” Playwright Jackie Sibblies Drury recognizes the complex theater-versus-journalism trap that monologist Mike Daisey recently found himself ensnared in, and deftly maneuvers her script around it. Opening with a brief presentation of documented historical information—numbers, dates, facts—involving Germany and a Namibian genocide at the turn of the twentieth century, things quickly become meta as a troupe of actors argues over how best to tell the “real” story.

If the only documentation available is a box of letters from German soldiers to their wives, how can anyone purport to paint a historically accurate picture of the Herero of Namibia? But if they stick to what is presented in the German documents aren’t they inserting emotional distance and reducing atrocities to statistics? Director Eric Ting’s six-person cast (with character names like White Man and Black Woman) is energetic, funny and engaging throughout, making the uncomfortably intense and emotionally rooted finale feel like a punch in the gut. (Zach Freeman)