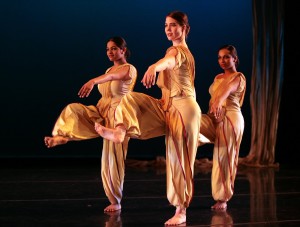 For good and ill, the American century had some important lessons for the globalized millennium to come—about the creative power of multiculturalism, about the permeable and sometimes illusory nature of identity, about confrontation and coexistence with the Other… and alongside those the attendant difficult, ongoing lessons about the ugliness of ignorance, racism and marginalization. Shirley Mordine, director of Mordine & Company Dance Theater, and Hema Rajagopalan, director of Natya Dance Theatre, explore cultural collision via dance, bringing their two companies together in a new evening-length work called “Pushed to the Edge.”

Rajagopalan and Mordine have done East-meets-West before—three prior collaborations placed Mordine’s weighted, abstract, modern vocabulary next to Rajagopalan’s rhythmically complex, classical Indian choreography based in Bharata Natyam—but never with such a confrontational title. And indeed, this new work reflects the kind of mutual trust that is only built over time; in several moments the piece is quite clear about the uncomfortable questions at hand. Rehearsal footage shows dancers tentatively scoping each other out, circling and craning their necks like timid dogs. In one scene, a circle of chairs is too small to accommodate everyone and dancers must vie for a seat at the table—a very direct image in a time of dwindling resources both ecological and economic.

The piece is inspired in part by the poem “Where the Mind is Without Fear” by Nobel Laureate Rabindranath Tagore, a single-verse entreaty for national tolerance and rationality that is quoted throughout the piece. Indian composer Chitrivina Ravikiran wrote and performs the score, accompanied by San Francisco-based jazz saxophonist George Brooks. The show plays in Skokie one night only and it’s worth the trip to the ‘burbs to see these two companies in conversation. (Sharon Hoyer)