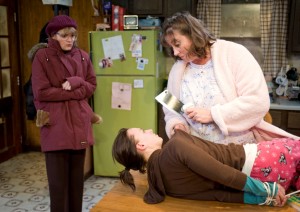 On the one-year anniversary of her husband’s disappearance, Valerie (Kirsten Fitzgerald) must deal with her shady pharmacist daughter Midge (Missi Davis), her eccentric police-officer sister-in-law Gail (Natalie West) and the new arrivals in the neighborhood—her long-absent brother-in-law Donal (H.B. Ward) and his timid wife Sevenly (Lara Phillips). The rumor in town is that she had a hand in her husband going missing.

Chatting (or, more often, fighting) around the worn dining table in scenic designer Grant Sabin’s perfectly homely working-class kitchen, the characters in Marisa Wegrzyn’s visceral dark comedy feel like they stumbled out of a twisted sitcom world somewhere between “Fargo” and “Roseanne” (and not just because the show-stealing West was a cast member on the latter). Director Shade Murray has his more-than-capable ensemble play it a bit broad throughout, which ups the laughter quotient considerably but makes for a bit of a slowdown whenever things get serious. Still, the show is consistently captivating, with spontaneously funny dialogue and plenty of surprises. (Zach Freeman)