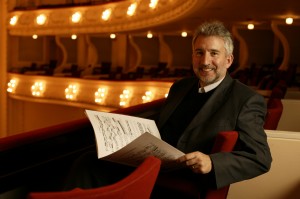 “Musical” and “Shostakovich” are two words few might expect to hear together. “Various people looked at ‘Moscow, Cheryomushki,’” explains the work’s adapter Gerard McBurney over tea, “but the reaction of most presenters in the West was, ‘Shostakovich? Oh, he wrote gloomy symphonies and string quartets. Not exactly a marketing dream.'”

McBurney—a composer, arranger, broadcaster and musicologist best known in the area for his popular “Beyond the Score” presentations at the Chicago Symphony Orchestra which he has overseen, written and narrated since that program’s inception in 2006—was commissioned in the early 1990s to take the piece’s large orchestration and make it performable for a production in his native England.

“I was called and asked if I knew the piece, and I said, ‘I do, I love it, but nobody is going to do it in the West.’ ‘Would you be up for a commission to cut it down?’ I said something very simple: that the piece quotes so much of Shostakovich’s music from the 1930s that the thing to do would be to take the forces from his Jazz Suite No. 1, which is a very popular piece that has a whole life of its own. Mrs. Shostakovich was very excited about this piece being revived and giving me permission to adapt it because she actually met her husband through this piece, so it was really courtship music for her.”

“Moscow, Cheryomushki” translates to “Moscow, Cherry Tree,” a satirical title. “We are in a new housing project called ‘Cherry Tree,’ but of course, there is no cherry tree in sight. It’s just a heap of mud, who is going to turn it into a park? Somebody said when we first did it in the nineties, ‘A show about a housing project?’ I said, ‘Everybody was doing shows about housing projects: “Wonderful Town,” for instance.’ In the post Second World War period, it doesn’t matter whether it was the US, Western Europe or the Soviet Union, no one had anywhere to live.”

One of the plot devices of the piece is that young people have nowhere to take a date or a future husband or wife because “everyone lived in a flat in which you shared with your parents, your uncle and your aunt, your grandparents. People were four people sleeping in a room. It was not a lot of fun and young people were angry. The story of the show is a group of young people who have had enough and don’t want to go on living like this. Since this is a musical comedy, the only way that they can beat the system is to create a magic bench where the truth can be told. That may seem childish to us, but for Soviets, that was a very funny joke and they rocked with laughter.

“When I lived in the Soviet Union, which was at the end of the Soviet era, I discovered that the advantage that the Soviets have over we Westerners is that in the Soviet Union, everybody knew the government was lying, whereas most Westerners may at some point discover that our radio and television is full of lies—and Frank Zappa may have said it quite a few times and very powerfully—but the idea that everything that emanates from the various people competing for the presidency is lies from beginning to end is tough for us to accept. The Soviets lived in a regime that said that the truth is determined by us: What do you do when you live in a society where everyone is lying all the time?” 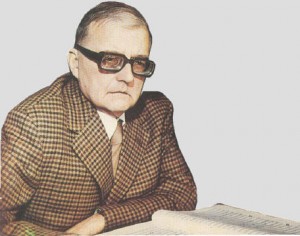 The old meets new is also parodied. “There is a young explosives expert who manages to get the innocent museum guide into her apartment and says he wants to kiss her, but they didn’t do kissing at that time in 1950s Soviet musicals and films. So instead he says, ‘I know what kind of music you like. You’re a museum guide—your head’s in the past.’ So he does a fake ala Ballets Russes thing and is poking fun at her, basically a long parody of ‘Prince Igor.’ Then she takes off her spectacles and says, ‘No, I don’t do that kind of music, and they launch into rock ‘n’ roll, which means that Shostakovich is the first person to write rock ‘n’ roll in Russian music. He heard it because his kids, who were quite privileged, had a couple of recordings that their friends had brought them. And you know how he was, curious about everything: he must have come and listened to what his teenaged kids were listening to. He doesn’t imitate it terribly well. It could have been Bill Haley or something, whatever he had. It is a tiny prism onto that world, a cargo cult of its own. And so he wrote this middle-aged take on how Soviets perceived early American rock ‘n’ roll.”

Another form parodied throughout this work is Viennese operetta. “Shostakovich had an encyclopedic knowledge not just of Lehar and Johann Strauss but of Russian operetta, which was immensely popular. There was a big cultural shift in the late 1930s where Stalin deliberately tried to unwind the more modernist, avant-garde tendencies in Soviet culture and replace them with what we would call a petty bourgeois culture which accorded more with the world of obedience and convention that he wanted to see. You can see this reflected in the films, architecture, and it was very much imposed. What ‘Soviet Realism’ was is anyone’s guess since Soviet Realism is what the government chose it to be at any particular point.

“One way that Stalin and his cronies thought they could make the populace less proletarian was supporting something that they called Russian operetta. Operetta theaters were built in every big city, usually next to the opera house. And of course, they had to have a repertoire for these things. They had a symphony orchestra in there, repertory cast, so they started out doing all the works that you would imagine, ‘Fledermaus’ and all the rest of them and they were wildly popular. Because these theaters had seasons from September through May, this was a money maker for composers and there was a whole generation of them that were writing like Broadway composers: light-hearted entertainment musicals. The whole culture grew up around these things: radio, movies, cast albums issued in a land not overly endowed with popular entertainment. This became a great source of popular entertainment. Millions and millions of people knew these works. Stalin liked that because it provided a dream state as it was not enough to be hammering away at factories all day.

“The work is a whole heap of fun, it’s hilarious and it has something for everybody. Shostakovich is a composer who covers a vast rainbow of styles and was like Tchaikovsky in that way. He wrote for every idiom and for every audience and always wrote with brilliance.

“And through it all, the shrillness of it even through these popular idioms tells you it’s Shostakovich. It’s that distinctive poster-paint harshness of the way he always voices everything where it is always at the top of the upper comfortable register whether it’s the voices or instruments. He loves those sounds, he loves the opposite of mellow. He loves this harshness, this shrillness: the music always bites.”