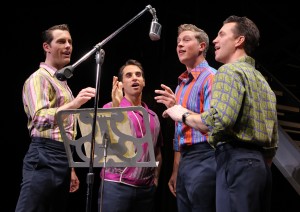 It has been nearly five years since “Jersey Boys” first took Chicago by storm with a subsequent two-plus-year-run that had it following the Broadway In Chicago “Wicked” template of opening here with a national tour but subsequently creating its own Chicago production. The 2006 Tony Award-winning musical which tells the story of Frankie Valli and the Four Seasons—warts and all and complete with the group’s hits meticulously recreated—has emerged as not only one of the most successful shows of the “ought” decade, but also one of the most emulated. As a national tour made it back to its old haunt the Bank of America Theatre, it was hard not to be swept away by the brilliance of the show which has stood the test of time remarkably well.

It goes without saying that those who fondly remember Frankie Valli and the Four Seasons being an essential part of the hit parade will have a great time at “Jersey Boys,” but what is remarkable about this account of the rise of the group from New Jersey street corners to the top of the charts is that it is a compelling story really well told, even if you couldn’t care less about, or know a note of, the music itself. This is hardly the whitewashed version of a group’s life a la “A Hard Day’s Night” or “The Monkees,” but the real deal complete with thugs, gangsters, drug addicts, true music-industry types, “friends” who stab you in the back, what it is like to live out of a suitcase and with other guys for years on the road (“the guy changes his underwear every three days”) and even what can happen to your kids when you’re never home. 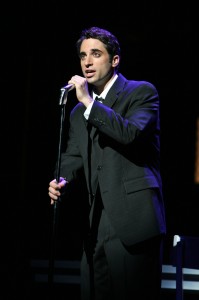 The rest is the music, that trademark falsetto sound with group harmonies reverently reproduced. This is the strongest cast yet that has performed here in this show, including Joseph Leo Bwarie as a vulnerable and most Frankie-like incarnation of Valli, with a seamless voice and acting chops to match. Preston Truman Boyd does a great job of showing how vital original-group-misfit-but-stellar-songwriter Bob Gaudio is to the story and John Gardiner makes a delightfully cocky and despicable Tommy DeVito, the show’s narrator. “Jersey Boys” remains an extraordinary, high-energy evening of entertainment, completely enjoyable whether being experienced for the first or the fifth time. (Dennis Polkow)