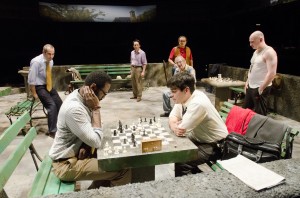 Playwright and chess master Cándido Tirado’s rumination on the brutality of human beings uses the chess board as a jumping-off point for covering a range of cruel behavior—from genocide to racism to unfair eviction—as three seasoned chess hustlers bicker and collude with each other while working to lure in challengers (referred to as fish) and take their money at the board.

The action takes place in the round, with set designer Collette Pollard’s tables and benches perfectly capturing the comfortably worn feeling of New York’s Washington Square Park and Jesse Klug’s lighting design (including some glowing chess tables) adding a touch of the heightened abstract.

It’s a talky script (running two hours and twenty minutes with an intermission) and director Edward Torres has his cast working hard to balance philosophical discussion with action. But for a story that puts so much emphasis on the all-consuming nature of chess and the stakes of each game, there’s too much distraction going on when the timed games are in session, particularly given that each game is professionally choreographed and visible from the audience.

Tirado provides more than enough fodder for post-show conversation, and the cast delivers both the comedy and the drama with finesse, but the escalated action of the finale goes a bit over the top. (Zach Freeman)