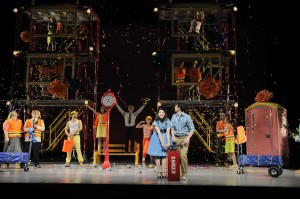 Brian Dickie has certainly given Chicago many firsts and many thrills in his twelve years as general director of Chicago Opera Theater, but Dickie has saved one of his best for last: the professional Chicago premiere of a satirical musical by, of all people, Dmitri Shostakovich.

With Stalin having declared modernism and the avant-garde anathema in 1936, operetta became a regime-approved art form and began flourishing during the Soviet era. Operetta houses were built next to theaters and opera houses, large orchestras and repertory casts engaged, and an entire generation of Soviet composers began writing a new species of still popular Russian operetta that remains largely unknown in the West.

Conductor Grigory Stolyarov was conducting Shostakovich’s  “Lady Macbeth of Mtsensk” when it became a regime target, and his career was derailed when he became collateral damage. By the time his career had recovered—more than twenty years later—and he had been assigned to be music director of the Moscow Operetta, Shostakovich congratulated him. Stolyarov responded by asking Shostakovich to write a new operetta for him. Knowing full well that it was payback time, Shostakovich obliged him.

Shostakovich might have turned in a perfunctory work, but instead he courageously used the post-Stalin and pre-Brezhnev temporary “thaw” of the Khrushchev era to produce a work that satisfied the lighthearted characteristics of the genre, but was also a surprisingly daring satire of the post-World War II Soviet housing shortage. Khrushchev had addressed the shortage by building banal highrises on the outskirts of cities, and the most infamous of these, Cheryomushki, outside of Moscow, was a name that evoked cherry orchards but in reality was a festering dump.

One cannot help wonder if the authorities may have missed the point or at least looked the other way, given that it was packaged as a series of melodic bonbons and waltzes all tied up with a big red ribbon. The people made the work so popular that it was even turned into a film a few years later, becoming a New Year’s Eve staple on Soviet television, a satirical Soviet “Fledermaus.” 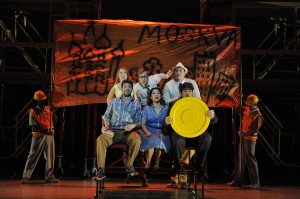 To perform this work for an American audience is no easy task, as much of the plot and the humor is so scenario specific. It doesn’t help matters that the attempt to translate the work into English does not line up well with the music itself, and keeping Russian names and places turns it into the worst of both worlds, despite the heavy use of supertitles. The spoken portions, which are endlessly chatty and form the torso of the work, lose much in translation and are often acted as if the performers, who are mostly singers, after all, are acting in italics.

That leaves us with the music, which is remarkably well served, despite the cost-cutting move of employing a jazz-like chamber orchestra rather than the large orchestra that Shostakovich calls for that gave the original score an MGM musical-like sheen. On opening night, the fact that the orchestra-pit elevator had broken down and forced the performance to proceed with the orchestra actually onstage and behind the performers seemed to, amazingly enough, have little discernible effect.

The sets and staging, though often minimal, are imaginative and sometimes conveniently reflective of the very banality being satirized. The dance sequences, cleverly choreographed by Eric Sean Fogel, are a particular highlight and at one point stop the show. Their elegance and confidence stand in remarkable, dream-like contrast to the conformity being portrayed, in almost Russian Bollywood-like fashion. (Dennis Polkow)