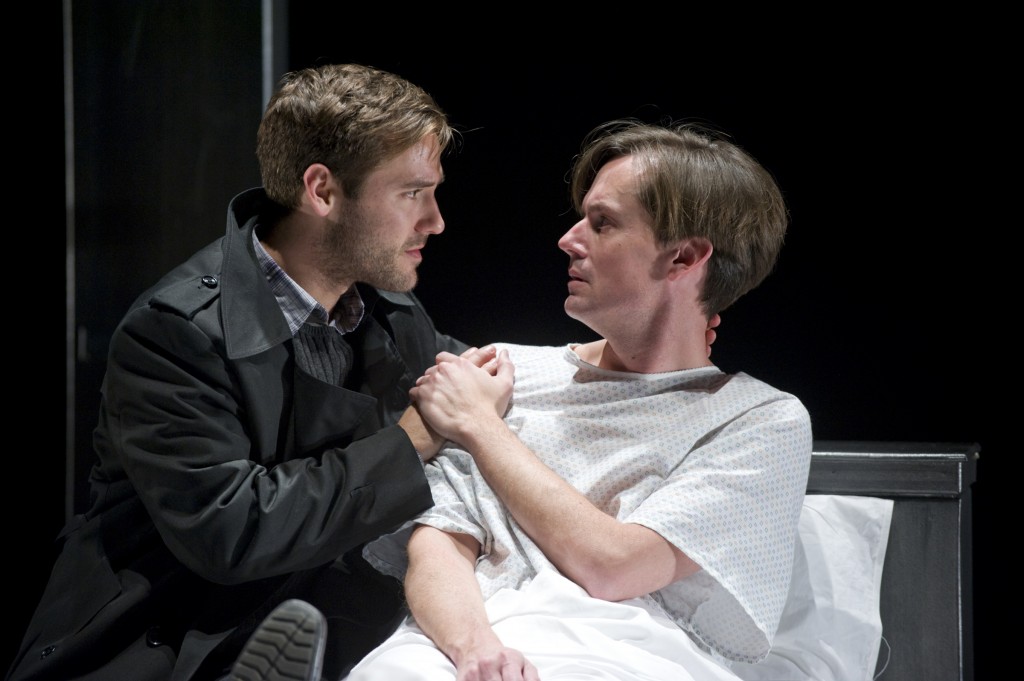 Perhaps the best theatrical experience is always personal, but ever since I saw “Angels in America Part One: Millennium Approaches” during the premiere run of its national tour at the Royal George in 1994, I’ve had a particular attachment to this show, which I’ve long considered the best new play of my adult lifetime.

I grew up in a typically cloistered Christian suburbia, at a time and place when homophobia born of ignorance was the casual norm. Like the character Joe Pitt, I entered a professional world with a commitment to conservatism in tow. As a straight man, the closet I emerged from was intellectual; after starting Newcity and building relationships with the creative world, the hypothetical existence of gay men became real to me about the same time that AIDS starting wiping them out, creating our own Lost Generation. It’s impossible to convey to someone who was not around at the time the shocking devastation of the epidemic; every day you’d hear about another artist, designer or writer stricken down before his prime, many of them household names. But this was not a community that would go quietly in the face of official disregard; queer activism raged in the streets through the activities of ACT UP and the individual defiance of artists like David Wojnarowicz and Larry Kramer. This was our Vietnam War.

Tony Kushner’s “Angels” arrived just as a dim glimmer of hope appeared: the drugs that would convert HIV from a death sentence to mere life without parole were in development and deployment. And the Reagan era seemed to be waning. As the characters in the play grappled with issues of religion, politics and morality at the same time they were prematurely facing death, either of themselves or their friends or lovers, “Angels” cast our time, which coincidentally fell at the end of a millennium with all the drama inherent within, as an epic moment—perhaps even, as Francis Fukuyama suggested, at the “end of history.”

I wondered, as I prepared to revisit “Angels” again, all these years later, would it hold up? Or would it be a relic of the Twentieth-Centuryism that gripped us during the nineties; the belief that time itself had peaked with us.

Even more, would I hold up?

It’s an interesting phenomenon of art that its viewers age and change around it while the work itself inhabits eternal youth, frozen in its time. Where I was the same age, roughly, of the younger characters when I first saw “Angels” and identified most with their predicament, I am now closer in age and, in some ways, in impulse to Hannah, Joe’s mother, who finds herself irresistibly pulled out of her own world and into that of her son and his friends who need a mother in their time of crisis.

Though the minutiae of “Angels” is dated at times—the nefariousness of Ed Meese is a memory for historians alone these days, and the optimism of the real Perestroika and a peaceful Russian revolution seems rather quaint in its aftermath. But who could have expected the ascendence of the Mormon Church into the national consciousness since then as, not only the shaper of a would-be president, but also as one of the most energetic forces fighting back against the dream of “Angels,” that the “world only spins forward.” As it was members of the Church of Jesus Christ of Latter Day Saints who largely bankrolled the notorious Proposition 8 in California that tripped the inevitable progress toward gay marriage in the state that is home to what “Angels” calls the closest thing to heaven, San Francisco.

I’ve sometimes wondered how Kushner chose Mormonism as the foil to his own Jewish heritage, the other religion, with its themes of guilt and secular intellectualism, that pervades “Angels.” Coincidentally enough, I first, and mostly, got to know members of the Mormon faith in my post-college days working for Goldman Sachs, a firm of Jewish heritage, where several were employed in my division. Folklore held that the firm sought them out for their loyalty and enterprise, not to mention their marital fruitfulness; show me a stable hard-worker, the line of reasoning went, and I’ll show you a man with a wife, children and a big fat mortgage who needs his job. It was almost like they were the last capital-A Americans. More likely, Kushner saw Mormonism, this baby of faiths, as a uniquely homegrown religion; the only time angels touched down in America.

And then there’s his Satanic Majesty Himself, the real-life lawyer Roy Cohn. A villain of particular scale in America, for his role as Joe McCarthy’s right-hand man during the Communist witch hunts and the trial and execution of Julius and Ethel Rosenberg, Cohn lived out an especially vile career as a lawyer for and from the right. Ironically, if Cohn were alive today, he’d probably have a show on the Fox Network, if he wasn’t too centrist for modern tastes. If his death in “Angels” was meant to signify a better world ahead, we’ve since learned that his specter has eternal life.

It is his death from AIDS that formed the conundrum of his existence. Tony Kushner’s Roy Cohn rages against everything including, especially, death. Roy Cohn Does Not Go Gently. We must have sympathy for this devil; he is the surrogate father for Joe. Is the absence of our paternal God in “Perestroika” to suggest that perhaps he is the Father Almighty of America, too?

One of Chicago’s finest actors, Larry Yando inhabits the character of Cohn in the role of a lifetime. He is comically vicious; as his sickness advances, so too does his derangement. When his eyes glow red near the end of his life and, I swear, his face has atrophied away, I challenge you to remember what Yando, the actor, looks like. He is Cohn. The rest of the ensemble, while equally talented, is not blessed with such rich roles. But Rob Lindley’s Prior Walter has to cover the most waterfront—he’s sick, he’s healthy; he’s ecstatic, he’s devastated, he’s dying; he’s dancing with his dreams and sparring with his angels; he’s in drag, he’s nude—and does so with a unity of characterization that is nothing short of remarkable. Hollis Resnik as Hannah Pitt and Mary Beth Fisher as The Angel are Chicago theater’s angels: when they touch a role, the audience is blessed. Eddie Bennett has a special challenge with the character Louis Ironson, as I suspect his neurotic intellectualism posits him closest to the real-life Kushner, but he pulls it off with an irritating lovability. Heidi Kettenring, who plays the pill-popping Harper, wife of the uncloseted Joe, has a pretty thankless job, but she delivers high highs. Geoff Packard’s Joe is pretty enough in body and spirit to make us believe that Harper, Louis and Roy could all fall for him. And Michael Pogue’s Belize is life itself; unwavering in spirit and devotion to his dying friend; I’d love to see a whole show spun around him.

The production, which was undertaken with the active participation of the playwright (who revised bits of “Perestroika” for this outing) is directed by Charles Newell with, expectedly, a fairly reverent approach to the material. Working with scenic designer John Culbert, they’ve created a variation of the open vertical minimalist grid that’s very much in vogue these days, allowing characters to position themselves both horizontally at eye level, and vertically above us, often but not always as they engage themselves in matters of heaven, dreams and illusions (the three states blend together in Kushner’s work). Projected backdrops convey many of the different venues (the Bethesda Fountain in Central Park, most memorably), as there is no attempt to create physical barriers between settings, or even scenes. Characters overlap from one scene to another on stage, creating a kind of simultaneous sense of foreshadowing or omnipresence of the issues they represent.

It’s rare to be able to see both halves of Angels on the same day. But a long day it is: a 3pm arrival leaves the theater around midnight, with a two-hour dinner break. And the range of subjects, the intellectual vigor and rigor of this script is many times the narrow scope contemplated in this review. So perhaps it’s just fatigue that suggests that “Perestroika” drags on longer than it should, especially in Prior’s scenes in heaven and in the dreams of Harper. A little bit of magical fantasy goes a long way. But, I’ve always found “Perestroika” wanting by comparison to “Millennium” for this very reason; it’s a vessel of open-ended optimism, which might work as an American spirit, but would do well perhaps if better constrained within the theater.

A decade or so ago, through my brother and his then-boyfriend of many years, I got to know David Hull. David was an internationally renowned scholar at Northwestern and an openly gay man in a time when men were not openly gay. His life story sounded like a scene from “The Boys in the Band”—until, that is, the onset of AIDS. David cared for the love of his life as he succumbed to the disease’s then-uncurable scourge; after his death, David never had another partner. Instead, he took in gay men in trouble, kicked out of their homes, kicked out of their cruel lives, and cared for them unconditionally—personally and financially. David died himself of natural causes in 2010 and I had the honor of attending the memorial service at his longtime home and hear one successful man after another pay homage to the man who’d shaped their lives. You could almost hear David speaking the final lines of “Perestroika,” “You are fabulous creatures, each and every one. And I bless you: More Life.”

If the God who’s gone absent in this world is He of the Old Testament, of the Torah—stern, demanding, unforgiving—then maybe Kushner’s right to suggest we’re better off with the angels. Angels like David Hull. (Brian Hieggelke)