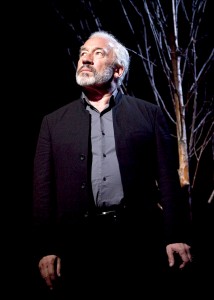 If veteran British stage and screen actor Simon Callow seems a bit late to the one-man-Shakespeare party given how many such plays there have been, consider that Callow has been doing various solo shows for years.

“‘Being Shakespeare’ is the direct offspring of the Dickens show that I did in Chicago about eleven years ago,” Callow explains. “This is more biographical investigation, or perhaps biographical evocation. In other words, I, the narrator, share with an audience the discoveries I have made about the character but I do that through their plays, their words and also the context. The idea is a bit like a Ouija board: you summon the character, the subject by means of smoke and mirrors, is the truth of it. A little biographical speculation, a little context and the discovery of that subject matter in the writer’s words.”

In the case of “Being Shakespeare,” the structure of the seven ages of man from the “All the world’s a stage” monologue in “As You Like It”  is a thread running through the play. “This is not only one of his most famous speeches, but one of the most famous summaries of human life. And it gives us a very clear foothold into the life of a man whose biographical materials are very illusive. The first stage is childhood, infancy. And so we ask ourselves: what was it like to be an Elizabethan child? And if it was like that for most Elizabethan children, was it like that, to some extent, for William Shakespeare?”

Taking known facts about Shakespeare’s life such as that his mother lost two daughters before Shakespeare was born and he was the the first child to survive is part of the process. “And so we look into the plays and see if we might find some point of context for that. And lo and behold, in ‘The Winter’s Tale,’ there is a little boy, Prince Mamillius, surrounded by women as Elizabethan children always were—they hardly ever saw their fathers—telling them stories. I’m not saying that Shakespeare wrote the prince as an autobiographical story, but we surely see at least a glimpse of the young Shakespeare here. And we go through the rest of the ages of man. To the schoolboy, to the lover, the soldier, justice and so on. That is the method. With Charles Dickens, we know everything. We have twelve volumes, a thousand pages long, of his letters. With Shakespeare, we have nothing: a single letter, a single diary entry, a single interview.”

Given that we have so much on Dickens and so little on Shakespeare, how accurate of a one-man show could have been constructed about Dickens if we only had the works? Could this serve as a measure of how biographically accurate “Being Shakespeare” might actually be?

“Well, we would undoubtedly have a long series of conspiracy theories because they would say, ‘This man only went to school for two years. He couldn’t possibly have written those novels by Charles Dickens.’ That’s a rather interesting speculation. I think you would have to assume that Dickens knew the city of London pretty well, and that he has a taste for the theatrical. You could make many conclusions from his works. You would note the recurrence of the figure of the child and conclude that something pretty significant had happened to that writer when he was a child. No writer has ever written anything totally objective. They might think they have, but they haven’t. No one has been able to totally transcend who they are as a human being. That would be to defeat the purpose of writing, one would think.” 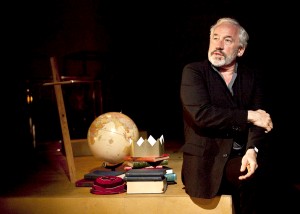 And yet with Shakespeare, it has become a cottage industry to try to make claims that are at odds with the writing itself, or that seek to claim that this is not a singular voice. “People somehow think that if Shakespeare were an Earl, then his genius would somehow need less explaining. It would be natural if an Earl were a genius, now, wouldn’t it?  Hilariously, the only letters that we have from the Earl of Oxford are unbelievably and tediously pedantic. And his early poems are drivel. So how it is that people make believe that he had the genius that they wish to deny Shakespeare, I don’t know.

“What is curious is that most of the impetus toward this idea comes from America. Delia Bacon, who thought she was related to Francis Bacon—of course, she wasn’t—was the first person to raise the issue at all. Then of course, there was a clergyman who rejoiced in the name of Reverend Looney helpfully for those that wished to mock the enterprise. Henry James was a great doubter of Shakespeare having come from Stratford-upon-Avon, Mark Twain was another great doubter. I even recently read that Helen Keller denied that Shakespeare was really Shakespeare.”

American authors having Anglo-envy? “I’m not quite sure what it is: it is very odd. Henry James was particularly dismissive of Shakespeare’s social class. He always referred to him as ‘the Lout from Stratford’ instead of most of the conspiracy theorists, which refer to Shakespeare as the Man from Stratford.

“Undoubtedly for those who like to play those games, there are amusing overlaps in the life experience of the Earl of Oxford and the apparent subject matter of this play. Shakespeare is that order of writer who absorbs everything in the air around him. He uses topical references, the latest book that he has just read, an anecdote that he heard in a tavern. It all gets eaten up and turned into art. But the ridiculous assumption that you couldn’t write about Venice unless you had been there is part of what underlies all of this. The Earl of Oxford went to Venice, so of course he wrote ‘Merchant of Venice’ and ‘Othello.’ Well, no: you could go to Venice and not be able to write ‘Othello.’ You could not have been to Venice and be able to write ‘Othello’ if you had heard a couple of interesting stories told by mariners about it.”

“There is a similarity in that music seems to have flowed more or less effortlessly from Mozart. Given the large number of plays written within a very short period, we can assume that they flowed rather effortlessly out of Shakespeare. He had to write the next thing as quickly as he could. So there wasn’t anything settled about that, either. He didn’t have an eighteen-month run of ‘Hamlet.’ It was on for a few shows and then it was off again. They might revive it now and then, but basically, it was a hungry audience who needed to be constantly fed new works. 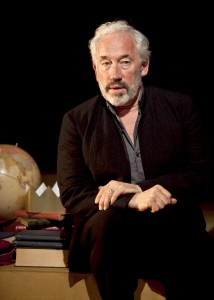 “We’re also talking about a man who has lived an ordinary life. There’s a wonderful sense of the domestic, the commonplace, of the soil, of the lived texture of ordinary life. A world in which you have a child, and where the loss of a child is the source of immediate heartbreak. Why Shakespeare is so wonderfully available to everybody in the world even in translation is that his experience is the experience of mankind in general. It isn’t the experience of an extremely elite kind of life, a life surrounded by money and wealth and servants but a life lived the way we all live our lives.”

The ordinary expressed in an extraordinary way? “Yes, absolutely. The ordinary given a blessing by language by the beauty of imagery, that’s what he does. That’s why we all look up to him.”

Callow hopes that by using the seven ages of man as the spine of the show, a better sense of the kind of life that Shakespeare led through those stages might be more apparent. “We also want to celebrate the extraordinary universal power of his writing about the human spirit. Shakespeare is the writer that gives us the most complete account of what it means to be human. It’s not just about William Shakespeare anymore, it’s about all of us.

“By the time we get to the sixth and seventh stage there’s a kind of deep hush in the theater because we all know we are headed that way. And nobody puts it better than him: bleak and terrifying though it is, ‘Is second childishness and mere oblivion, sans teeth, sans eyes, sans taste, sans everything.’ We’ve all seen in our parents, our grandparents, we see signs of it in ourselves. That’s when our show begins to transcend biography. It affirms that the work is everything because this particular work tells us so much about ourselves.”