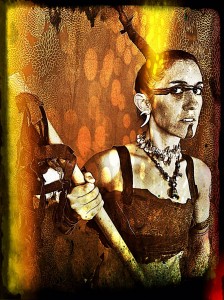 This small, all-woman production of Moby Dick shows promise in the premise and casting of very capable actresses, but falters on many levels. Director Bob Fisher’s script, written with Sara Gorsky, could use some trimming, as the show manages to feel too long at a little more than two hours. One of the most problematic scenes involves a dream of Ishmael’s where the story of Jonah is reenacted at the top of act two. This scene, although interestingly staged, does nothing for the advancement of the plot. Just as Ishmael narrates Herman Melville’s novel, the character (Erin Orr) narrates the play. Unfortunately, Orr fails to find her footing until the last twenty minutes of the play, leaving most of the first act unengaging. Meanwhile, Amy E. Harmon steals the show with her riveting performance as a dignified yet deranged Ahab who sinks further into insanity as the show goes on. In the nine-actress ensemble, Liz Chase’s Queequeg and Shantelle Szyper’s Pip are other highlights, as well as Jill Fredrickson’s masks that manage to effectively transform actors into whales. Hopefully the next All Girl production, “All Girl Heart of Darkness,” will realize the potential they attempt to attain in this production. (Monica Reida)