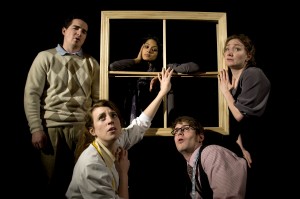 “So, what did you do last night?” a businesswoman habitually probes her coworker over those first scalding sips of morning java. “Nothing,” he shoots back with casual dismissal, having obviously done something. In mid-afternoon, a parent interrogates his teenaged spawn. “How was school?” “Good,” she says, seemingly unable to feel anything grander than chill. Playwright Sarah Ruhl is majorly bummed out by these all-too-regular scenarios. So much so, that she has written, for our viewing pleasure, a “defense of melancholy.”

“Melancholy Play” is Ruhl’s hopeful obituary for the forgotten and looked-down-upon emotional state of being called melancholy: a sustained, billowing sadness. “Are we capable of melancholy?” the play wonders out loud. It’s a question worth asking. Caught up in the present-day fury of naturalist performance, most aspects of the bombastic melodrama, including melancholy, have been tossed aside in favor of internalized emotional thunderstorms and external poker faces. The same is echoed in our daily lives. But Sarah Ruhl longs for the past, or her perception of it anyway.

Don’t let the word melancholy bother you. This play is, by all accounts, a farce. Still, the author asks for a respectful treatment and examination of all things melancholic—the same treatment that is allotted the “sad” and the “happy” onstage. Fair enough.

Grey Ghost Theatre’s new production at The Viaduct, the first staging of the work in Chicago since the Piven Theatre premiere in 2002, occasionally loses sight of the play’s deep humanity, opting instead to highlight the zany humor and bulldoze the meaning. What director Amber Robinson’s production does get so right is the irrepressible smile that a Sarah Ruhl play always coerces, if only for a little while.

Tilly (Mouzam Makkar), a young romantic, forcibly enters the lives of four middle-aged folks, Frank (Andy Junk), Frances (Maggie McCally), Joan (Mallory Nees) and Lorenzo (Peter Durkin), and, by happenstance, makes profound connections with each. All of them, mistaking her melancholic poetry for sexy pangs of affection, fall hopelessly in love with her. Zippy antics are aroused from the confusion, most notably in final scenes, making integral use of almonds. The unique weaving of the almond into the play is not fully realized in this production, which seems thoroughly baffled by it. At times, I got the impression that the young troupe of actors was actually poking fun at the nut.

The actors are uniformly too young to play these roles with the sort of personal  desperation that necessitates a major change in life direction. Ruhl tends to write best for the middle-aged. She molds, with motherly attentiveness, characters that at a particular juncture in their lives defy society and embrace their infectiously curious spirit. Other than the youthful Tilly, played with a richness by Makkar that contrasts her small frame, these characters carry a burden of age that’s tough to approximate. As Joan, Mallory Nees radiates that hard-to-come-by brand of maturity that the play absolutely requires, but she is pretty much the only one.

The cast’s youth does bring out a comfortable generosity and a genuine pluck that enlivens the purposefully droll script. The speedy, wilder first half of the intermissionless play is nicely complemented by their jolt of gusto and enthusiasm. It’s the same intangible spark that most plays this season have been so sorely missing. But that spark is a challenge to harness for any substantial amount of time, and here other elements are vigorously attempting to squash it.

The production is stifled by the design. “Melancholy Play” is an ideal play for a storefront company’s first outing. But Mollie Slattery’s set is overdressed with hanging fabric in neutral colors and a whole Menards stock of window frames. The frames are manipulated intriguingly by Robinson, but they create an impedimentary doorstop for some choppy transitions. Similarly, John Weygandt’s area-specific lighting design, dividing the small stage into different playing spaces, is sometimes too limited for the actors to actually find their light.

But there is a shining beam among the darkness. One of the wonderful joys of this production is the masterfully composed cello music by Ben Hjertmann that is fluidly performed by Jeremy Ward as Julian. The music bounces sprightly, perfectly capturing in sound what, I believe, Ruhl means by melancholy. A sadness that moves beyond despair and, somehow, into the playful, into the farcical. It is unfortunate that, during the second half of the play, the music is the only element to do so. (Johnny Oleksinski)