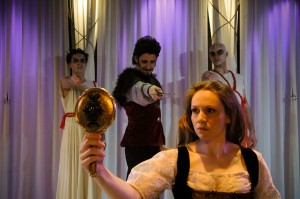 John Webster’s 400-year-old Jacobean revenge tragedy is most famous now for its violent incestuous themes and high body count. This has come to overshadow the accomplishment of “The Duchess of Malfi”: Long before the concept of psychoanalysis had been created, Webster made a complex and penetrating study of  human nature’s self-destructive and pathological tendencies. The plot line—two brothers conspire, out of clearly psychopathic sexual perversions, to kill their widowed sister the duchess after she remarries secretly and below her station—is only the beginning of a story that ultimately finds its moral center on the double-crossing spy-murderer Bosola, who’s as close to a proto-existential character as Hamlet. 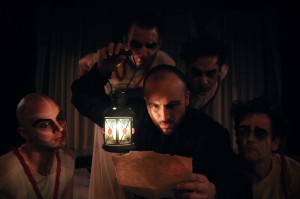 Strawdog’s production is admirably dynamic and intense, but it can’t always make up its mind about what it wants to be, beginning with a mannered stage aesthetic that combines a relaxed quasi-costume drama (the play is set in sixteenth-century Italy) with a stylized East Asian influence—lots of gongs, strong Noh theater references, and so forth—that doesn’t quite gel, especially the decision to have a chorus of male actors in white makeup and robes break up scenes with choreographed abstract dances that border on stereotypically bad performance art. Director Brandon Bruce is clearly going for epic in every sense, which also sometimes gets undermined here, as every scene is heightened to the point of near-camp effect (at moments toward the end of the production, the show plays with the potential humor of this with deadpan asides by chorus members after hysterical avenging scenes). Frankly, many of the actors seem ill-used; the excellent John Taflan as Ferdinand, the brother who dominates the first half of the play, setting the tragic events in motion and eventually losing his mind over his madness for his sister, loses all of his usual subtlety—and any identification the audience might have with him—in a near-constant flood of evil rage that gets spent too early in the show. It’s not always clear how much we’re asked to believe in the characters or how deeply Bruce wants us to feel for them. That said, the show is truly vital and spirited, and the energy never flags; this is a production that lives up to the sort of highbrow pulp that we’d hope from the theatrical experience.

The Cardinal, one of the duchess’ brothers, at one point remarks “How tedious is a guilty conscience.” It would help if Strawdog would let a bit more of that tedium play out, but it’s still an adept, powerful production. (Monica Westin)