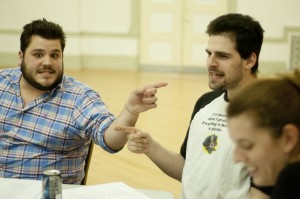 Coriolis Theater Company is launching a live sitcom “airing” in Chicago this summer. Written by four local comedians and directed by Grayson Vreeland (a.k.a.“Ketchup” from the Colbert segment on Occupy Wall Street), “Maggie and Coco Save The World” delves deep into the insecure hilarity of post-collegiate slacktactivist culture, conspiracy theories and nature documentaries. Vreeland explains: “After six months of confronting police and engaging in direct actions, Coco has to move back in with her longtime best friend and roommate, Maggie, and attempt to reintegrate herself back into her old life with her old friends, while still trying her best to save the world.”

Audiences will observe the city-dweller power dynamic in installments; the pilot launches April 26, with one episode going onstage per month until September. “The team comes from all kinds of disciplines—improv, sketch writing, acting, standup, playwrighting,” says Sarah Garner, head writer of the project, adding, “We all seem to find a sitcom that we come back to.” With influences ranging from “Cheers” to “Friends” to “30 Rock,” this show is a recipe for poignant nostalgia.

“Young, educated people are in a funny situation because they seem to have an endless supply of knowledge, belief in their ability  and general optimism, but an increasingly smaller amount of jobs,” explains Garner. “We wanted to create a show that specifically tackles the way idealism flounders once it hits the ‘real world.'”

In order to keep the mood irreverent, Coriolis will offer an extra half-hour of improv comedy before each show and karaoke at Brando’s Speakeasy. (Scott P. Barrons)