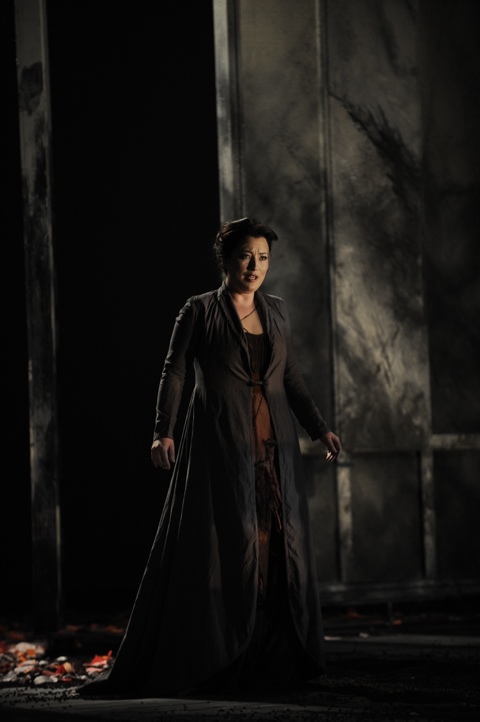 The third time is the charm, as it turns out. Handel’s “Teseo” (“Theseus”), crowning Chicago Opera Theater’s spring season and the penultimate opera of Brian Dickie’s general directorship, is also the last of COT’s Baroque opera “Medea” trilogy that began with 2010’s production of Cavalli’s “Giasone” (“Jason”) and continued with last year’s production of Charpentier’s “Médée” (Medea). Taken as a whole, this cycle stands as one of the most important artistic initiatives COT has brought us.

Medea was last seen in the climax of “Médée” setting fire to Corinth and murdering her two children, but between Charpentier’s opera and Handel’s she has made her way to Athens to seek asylum and betrothal from King Egeo who has no heir since his only son Teseo is unknown to him due to a promise the king made to Teseo’s mother. In Handel’s “Teseo,” the young hero fights for the king without either knowing their identity and with both courting Agilea. The king plots to kill Teseo while Teseo is magically seduced into cohorting with Medea, and so on. If it all sounds a lot like Handel’s “Rinaldo,” seen recently at Lyric Opera though set during the Crusades, only the setting and names are substantially different.

Of the triptych, “Teseo” is certainly the most consistently sung of the three COT “Medea” productions, with a superb cast of young singers across the board who assimilate eighteenth-century style-singing with aplomb. Ryan Center mezzo soprano Cecelia Hall makes a dashing Teseo and sings and acts the heroic trouser role with conviction. As the heroine Agilea, Italian soprano Manuela Bisceglie has some of the most demanding singing of the piece which is dispatched with elegance and poise.

Although not having as much to do or sing as in the previous operas, mezzo soprano Renée Tatum makes a striking Medea, a sorceress worthy of both our interest and as the villainess of the piece, our disdain as well. There are two countertenors, Gerald Thompson as Egeo and David Trudgen as Arcano, both in splendid vocal form, Trudgen also the love interest of Clizia, sung by soprano Deanna Breiwick.

The carryover for all three productions has been the sturdy presence of Baroque Band—the Chicago-based period-instrument ensemble that British violinist Garry Clarke founded here in 2007—which is conducted by Michael Beattie who also played harpsichord continuo that was also nicely filled in by theorbo and second harpsichord. Special mention must also be made of the minimalist but always elegant staging and costumes for “Teseo” by James Darrah and of François-Pierre Couture’s sets and Julian Pike’s effectively less-is-more lighting. (Dennis Polkow)