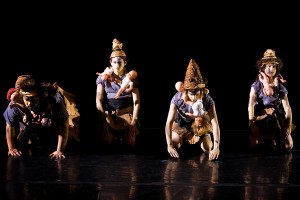 “In this day of YouTube and mediated ways of having engagement and interaction, I feel it’s very important to have human-to-human direct experience in the same space, ” says Nicole LeGette, founder of blushing poppy productions. “There’s something that situation enables that’s not possible through a mediated technology. That’s one thing with my performance work—it works a lot with energy and with how to activate the imagination and the invisible space. Those things are very difficult to translate in video. It’s about the live, shared experience between performer and audience in a very visceral and I think very human way.”

To call LeGette’s performances visceral is something of an understatement; a distillation of the visceral seems more apt. In a preview of her new evening-length production, “disRuptureEnrapture,” grotesquerie, horror, tenderness, humor and absurdity all coexist within a single gesture. Four performers, faces painted white, clad in lunatic samurai armor assembled from corrugated cardboard, wicker baskets and battered plastic dolls move to an ambient soundscape on a softly lit stage with such slow deliberation that, at moments, you feel as though you are viewing a painting in progress. The experience of time warps, suspends. Breath slows, attention hones. I was told the excerpt was about ten minutes and, while I have no reason to doubt the figure, it could just as easily have been five minutes or a half hour.

LeGette works in Butoh, an avant-garde performance style that emerged in post-WWII Japan. As a body-based movement art form, Butoh is generally classified as dance, but not once in our hour-and-a-half conversation did LeGette refer to herself, her performers or her fellow Butoh artists as dancers. And indeed, there is much about the form that confronts commonly held notions of dance, along with a host of other performative human endeavors, both on and off stage. Stillness is one such confrontation; LeGette referred to “radical stillness” in the description of “disRupture” and I asked what she meant.

“It’s a dangerous place to be still, especially on the stage let alone in daily life. Life is signified by movement, even if it’s the vibration of molecules. In our day and time we are all having to be in constant motion, going from one thing to the next to the next.”

The very dangerousness and vulnerability of a still body on stage does impart that body with a singular power. There’s both a defiance and an invitation to it. Those seemingly contrasted ideas are amongst many that Butoh is singularly well equipped to embody and resolve in its technique: strength and frailty, tenderness and savagery, frivolity and tragedy, depravity and grace. All human folly is acknowledged and put on display. Much of this is achieved through abstraction and metaphor: in costuming, in gestures and in the exaggerated, grotesque facial expressions affiliated with Butoh. The performers’ faces, while highly expressive, are mask-like in their contortions, their emotional content complex and indistinct. In “disRupture,” the four performers seemed to me puppet-like stand-ins for a greater human experience. I asked Nicole if characterization was part of her process.

“The first step of Butoh is how to erase or lessen your own ego,” she says. “It’s oftentimes said that applying the face paint is a way of erasing the self to better illuminate the universal self. The protagonist, or performer, is never held to being a single entity through the whole thing. I constantly shift the thing that is performing on stage. Each performer may create a mini-narrative of their own; I provide the forms and qualities that I’m trying to have everyone coalesce around. So I do a lot of work with this notion of character. I describe it as an associative correspondence.”

It sounds both technical and vague, but the effect is potent, dreamlike. The piece premieres in full at Links Hall this weekend and features a cast of more than a dozen Butoh performers and musicians. LeGette didn’t want to give away too many surprises in store, but she did say, “The audience is asked to be a willing, cooperative participant and this will be a riotous experience.”