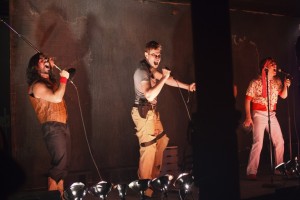 This Bailiwick Chicago/New Colony musical collaboration focuses on a dystopian future where every American family is limited to one child; every additional child is raised underground, ignored by the surface world. If you can’t remember that, it tells you so in the program. Five musical numbers reinforce the show’s thesis. We get it already.

It’s an interesting idea backed by a “Spring Awakening”-esque energy. But Chris Gingrich and director Andrew Hobgood’s lyrics don’t advance Patrick Coakley,  Evan Linder and Hobgood’s book as much as recycle the narrative. The songs function on two speeds, anthem and anthemic ballad. The ensemble features many strong rock voices, but many of the actors seem almost too polished to pull off the post-apocalyptic edge the show shoots for; they seem out of place in their ragged Flat Iron Building space. Hobgood’s static staging during most numbers gives the cast nowhere to go; they desperately need to move forward. (Lisa Buscani)

At Collaboraction Studio 300, 1579 North Milwaukee, numberless.org. Through May 26.