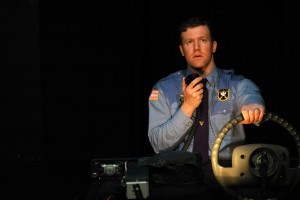 While successfully evoking the deep isolation and suffering present in Bruce Springsteen’s legendary “Nebraska, ” the newest production from Tympanic Theatre also adds doses of surreal imagery and humor. With eleven playwrights paired with ten Chicago directors each using a different song to draw inspiration, the plays run the gamut emotionally. The dim, intimate space at the Right Brain Project lends the impression that all the characters exist more or less “nowhere,” isolated and forced to live with their regrets and mistakes regardless of their present circumstances. Alongside their humane pathos lies an undercurrent of violence and menace, but it is not always clear whether the characters fear or court this danger, or both. The first play, “Man Will Meddle,” draws this ambiguity particularly clearly by giving us a glimpse into the life of a wife and mother (Sarah Mayhan) on the day her former lover (Kevin Murray), the serial killer of Springsteen’s song “Nebraska,” is to be executed. When she reads the paper announcing the execution, her husband (Jereme Rhodes) forces her to confront her past, revealing her persistent infatuation with the killer’s malt-shop fifties-era brand of machismo.

All this is borrowed largely, if skillfully, from Springsteen’s album itself, which is nothing if not violently and passionately depressing. Tympanic’s production marks its own territory with a slew of surreal set pieces and directions, and sprinkles of Lynchian humor one would think distinctly unfit for the themes and tales of “Nebraska.” A judge who has been kidnapped by a vengeful woman on behalf of her inmate boyfriend provided the strongest laughs of the night, but my personal favorite was the three rest-stop waitresses who use rock-paper-scissors to dole out responsibilities of all kinds, some more sinister than others. With the added bonus of original musical prologues and interludes from local musicians inspired by the plays themselves, which serve to situate the audience comfortably within the intimate theater and settings, “Deliver Us From Nowhere” is an illuminating and entertaining experience for theater and Springsteen fans alike. (Rob Underwood)