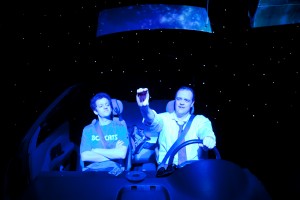 “Sixty Miles To Silver Lake,” billed as a coming-of-age depiction of Denny (Ethan Dubin) as his divorced father Ky (Sean Bolger) drives him from his soccer game to his dad’s home in Silver Lake, is actually only about the self-centered schmuck Ky; we don’t get the personality of the son. Dubin is a superb actor in reacting to his father’s clumsy attempts at hilarity and explaining sex. The play, with its fifties-era thinking; the meaningless work the father does and the father’s progressive disintegration, reminds me of Arthur Miller’s “Death of a Salesman.” But here, the father has no redeeming characteristics, and the gay- and women-bashing gets tiresome.

It’s not clear whether the play, which takes place solely within the car, depicts one such journey or several. Perhaps the erratic interludes that ask, “Can I go home now? Are we safe?” are supposed to signal a change in time or Denny’s age, but I don’t buy it—he seems to hover, amoeba-like, around being fourteen years old. And Ky’s vitriolic rages about his ex-wife could not realistically have been directed at a son of any age, certainly not more than one momentary loss of control.

There’s some good writing here from playwright Dan LeFranc, as in Dubin’s monologue about the sexy way adulteress and coffeeshop barista Darcy makes and presents Caesar salad, but it’s out of character for the son as we’ve known him to that point. There are some beautiful visual effects, like the snow at the end, but better use could have been made of the projected images, which I finally figured out represented the doodling of bored Denny in the condensation of his breath on the car window. (Inara Cedrin)