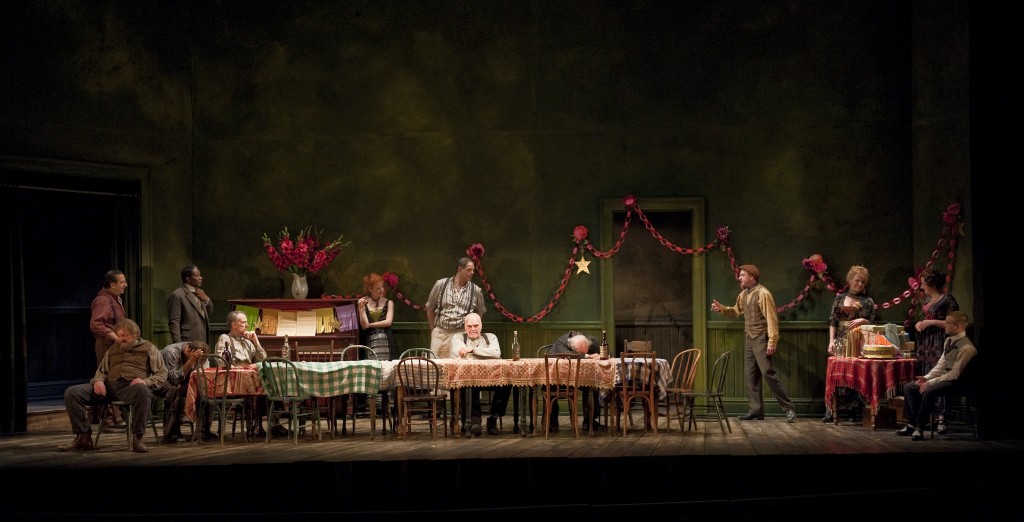 When it was first announced that Nathan Lane would be taking on the lead role of Hickey in “The Iceman Cometh” at Goodman Theatre, a New York Times reader wondered aloud if this was for real, or an Onion article. Could one of the great song-and-dance men in musical comedy successfully transfer that prowess to epic, angst-ridden drama? Performing comedy has always been serious business and this was a part that Lane lobbied for when he learned that his colleague and friend Brian Dennehy—who played the role of Hickey at Goodman twenty-two years ago—was interested in taking on the role of Larry in the show. Never having worked together, Lane saw this as an opportunity to take on a new challenge with the additional incentive of working with Dennehy’s longtime Eugene O’Neill collaborator, Goodman artistic director Robert Falls.

The play starts in darkness with only the slightest bit of light showing on Dennehy’s granite face and his other booze-soaked companions sprawled out at a bar. All is usual, at least in an O’Neill universe, as we learn of their various squashed pipe-dreams, those delusional hopes of the hopeless that keep them going but which have no basis in reality. 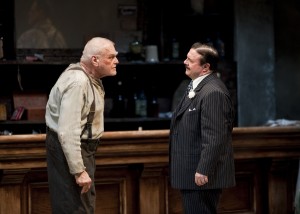 When Lane does make his entrance as Hickey, the fast-talking salesman that all are waiting for, the one who routinely springs for drinks and an annual party for the bar owner, he is singing a song and greets his companions with various trick handshakes, and so on, like a loudmouth vaudeville performer who looks and sounds exactly like, well, Nathan Lane. Instead of disappearing into the role, the same Lane look, manner and persona we know so well are relentlessly and distractingly on display. In fact, aside from his straw hat and a slightly thicker moustache, Lane looks as if he is wearing the same costume that he sported when he was last here playing Gomez in “The Addams Family” musical.

The other characters sound like the lost souls they are portraying, while Hickey comes off as a comic buffoon. To be fair, Hickey could be played this way as written, despite the fact that we have become used to much more serious portrayals, including Dennehy’s own. A far larger problem than Lane’s approach is his displayed range, which goes from funny loud to angry loud with little in between. It says a lot that when Hickey begins his search-and-destroy truth missions with each of the patrons, in almost every case the characters come off as more genuine and true to themselves than Hickey does. Again, the character as written could support that interpretation, but it fails to ring true when Hickey’s deconstructions come off as phony as he does. After all, the premise of the show is that Hickey is a changed man: instead of the usual snake oil, he is dispensing truth for one and for all and that truth has to be delivered in a way that startles his friends with its disarming plausibility. That unfortunately never happens.

The famous Act IV monologue which has always been the heart of the play becomes by and large a screamfest, punctuated by some tears but with little in the way of anything resembling introspection, the crucial element. Yes, Hickey is insane, to be sure, his world is an alternate madhouse universe. But what has always made “Iceman” so compelling is that the bar patrons and we, the audience, have to believe that Hickey believes that this world is so real as to make us believe, even for a moment, that it may be real. Of course, the true horror of what his confession reveals should ideally make it question our own dangerous delusions about ourselves as well but, sad to say, not here. Perhaps it will come as the run continues and Lane more fully inhabits this character over time.

Falls and Dennehy nonetheless give us plenty else to chew on to make this a worthwhile experience, to be sure. The relationship between Dennehy’s character Larry and Don, the son of his ex-girlfriend who has betrayed his mother—which should be an echo of Hickey’s dilemma—here actually takes center stage, even in the staging. Patrick Andrews, who early on follows Lane’s lead of screaming relentlessly as Don (as in fairness, do much of the cast) brings more finesse to his performance as his self-awareness mounts. And Dennehy is such a compelling presence, even when he is sitting still not saying a word but simply taking everything in, that we see all that is happening in the bar through his eyes.

The big question is whether or not all of this justifies a nearly five-hour night in the theater, and the real answer depends on your devotion to the material. Without a compelling Hickey, the play does come across as very long, and a reminder that we endure our angst at a much faster pace today. But with that void, other aspects and layers of the play that would otherwise go unnoticed will undoubtedly be fascinating to O’Neillophiles. (Dennis Polkow)