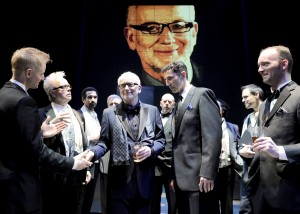 Money can’t buy friends. And as Eric Clapton sings, “Nobody knows you when you’re down and out.” These are lessons wealthy financier Timon learns the hard way when his fortunes flounder and his requests for financial aid are rebuffed by his affluent associates. Considered an unfinished work by most scholars, the somewhat disorganized structure of Shakespeare’s rarely performed “Timon of Athens” (staged at Chicago Shakespeare only once before, in 1997) presents a number of problems. Thus artistic director (and director of this production) Barbara Gaines spent some time with actor Ian McDiarmid (who elegantly captures both the comedy and tragedy of the titular character’s experiences) adapting the story in an attempt to make things clearer. But despite their reordering efforts and smart line tweaks (for example, Timon’s great debts are counted in millions of dollars and owed to “bankers”), there’s still a disjointedness between the first and second act that both lessens the impact of the very relevant themes (predatory lending, bankruptcy, greed) and leaves the overall story feeling scattered. On Kevin Depinet’s sleek (though somewhat sterile) set, modern flourishes ably bring this work into the present. Most notably, a painter remarks “here is a touch” before swiping his finger across an iPad and displaying his work on a giant screen (projection design by Mike Tutaj). The presentation is polished, but the script needs some work. (Zach Freeman)