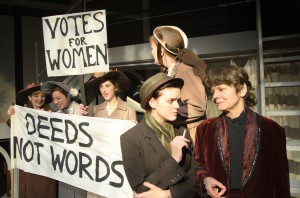 The British suffrage movement was marked by a violent urgency: a supporter died, throwing herself in front of the king’s horse during a race to draw attention to the cause. Unfortunately,  Rebecca Lenkiewicz’s script detailing the struggle lacks that urgency and collapses in a somnolent mess.

Lenkiewicz’s storylines obscure each other and keep the piece from reaching the tension that informed the movement and the times. The script offers plenty of opportunities to demonstrate the suffragettes’ longing for love and freedom but the pain doesn’t read. The show’s emphasis on relationships falls flat without the emergency that made those relationships necessary in the first place. (Lisa Buscani)